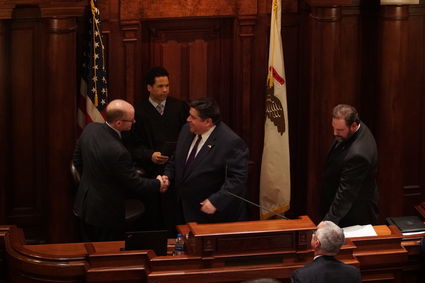 The governor, a Democrat, presided over the floor vote as legislators elected Democratic Sen. Don Harmon of Oak Park as the 39th Senate president in Illinois history.

It is a constitutional role the state's governor fills when the Senate is without a president - usually after senators are sworn in for a new term in January of odd-numbered years.

Sunday's proceedings, however, were the first time since the 1970 Illinois Constitution modernized the chamber's leadership roles that a governor assumed this role in an even-numbered year.

Pritzker, in following the rules of the chamber, first established enough members were present to officially choose the new president. He then asked for nominations. Harmon secured 37 votes.

The newly-elected Senate president walked up to the dais, shook Pritzker's hand with a smile and was sworn in by 7th Circuit Court Associate Judge Rudolph M. Braud Jr.

After Harmon raised his right hand and swore to "faithfully discharge the duties" of his new office, Pritzker's duties for the day were finished.

"Nothing says party like waiting for Senate Democrats to vote," Harmon told Pritzker, who celebrated his 55th birthday Sunday, as he addressed the chamber.

The governor's spokesperson said Pritzker was "honored to hold the gavel and witness a new era in the Senate."

"I am confident that Don will ably serve and lead the Senate with a steady hand and hold integrity above all else," the governor said in a statement.

The chamber's rules dictate a Senate president can serve for no more than 10 years, or lead for five General Assemblies.

The former Senate President, Chicago Democrat John Cullerton, announced his retirement in November after more than a decade at the helm of Illinois' upper chamber. He spent about 40 years as a lawmaker, first serving in the House before moving to the Senate.