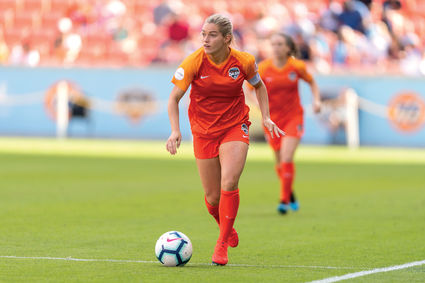 Forward Kealia Ohai was traded to the Chicgao Red Stars.

The Chicago Red Stars announced a deal to acquire forward Kealia Ohai from the Houston Dash.

In exchange, the Dash receives the 18th overall selection in the 2020 NWSL College Draft and defender Katie Naughton.

"Any team in the league would jump at the opportunity to add Kealia to their roster," Red Stars coach Rory Dames said. "She has proven her ability to score at this level and we are excited to get her integrated into our group. We look forward to having her here in Chicago."

Ohai was selected second overall by Houston in the 2014 NWSL College Draft.

She scored eight goals and tallied six assists throughout her first two seasons .

She inserted herself amongst the league's most lethal goalscorers in 2016, scoring 11 goals in 10 games and finishing the season tied for the league's Golden Boot.

Her performance would earn her a spot in the 2016 NWSL Best XI.

Ohai continued her scoring ways at the beginning of the 2017 season with two goals in the first three games of the year before injury cut her season short.

She would return from injury the following year, finishing the campaign with five goals. In 2019, she was awarded the NWSL's Goal of the Week in the fourth week of the season.

In college, she was a four-year starter with North Carolina from 2010 to 2013 and was a member of the 2012 championship-winning team where she was named the tournament's most outstanding offensive player after scoring the game-winning goal during overtime in the semi-final and the first goal of the final in the second minute of the match. Ohai made her international debut for the senior team on October 23, 2016 against Switzerland in a friendly match in Minneapolis. She scored 48 seconds after entering the match as a substitute in the 81st minute, setting a record for the fastest goal in a US women's national team debut.

She received a call-up in July 2018 to the United States Women's National Team training camp for the 2018 Tournament of Nations, this marked her first call-up since injuring her knee in 2017. She did not make the final roster for the tournament.

Naughton was drafted by Chicago as the 19th overall selection in the 2016 NWSL College draft.

Naughton has made 88 appearances with the Red Stars, including 24 games played in 19 starts last season. She was awarded Chicago's Defender of the Year back in 2018.

"Katie has done everything we've asked of her and we can't thank her enough for her time here," Dames said. "She was a great teammate and the ultimate professional, we wish her the best of luck in Houston."

Ohai and the Red Stars return to action this spring for the 2020 NWSL Season.