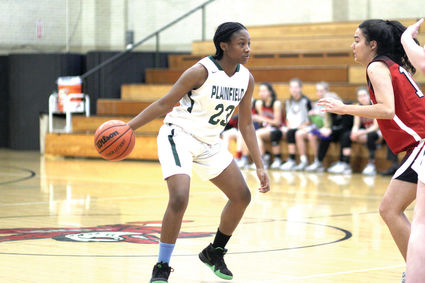 Plainfield Central is 8-9 on the season and looks to keep improving.

With the departure of last year's star Annaliese Griffin to Aurora Christian; Plainfield Central has had to find new ways to win ball games.

This year, led by senior point guard Kachae Donald, the Wildcats (8-9, 3-2) have yet to find consistency.

Recently, in the first game of the Chicagoland Invitational Showcase at Benet Academy, the Wildcats suffered a 78-44 defeat to Barrington.

"We're still trying to figure out what is going to be our strengths and weaknesses," said coach Armond Frazier. "From game to game it changes, so when we have some new faces and players that left it makes it harder for us because we understood our identity then."

To this point in the season, the Wildcats largest winning streak was four games, but they have also suffered consecutive losses three times.

Still a young team, the Wildcats team underclassmen consists of two sophomores and two freshman, which Frazier said will take time to develop going forward if they want to be more successful.

"Kachae is the all-time leading three-point shooter in almost every category," Frazier said. "It really helps when she's out on that floor."

With more than a month of basketball that is still to be played, Donald said that in order to get past the hump of mediocrity, the teams energy has to be more consistent and not constantly worrying about the scoreboard.

"Just like in this game, we had a lot more energy in the second half and that's when we really started to play a lot better and go on runs," Donald said. "I think we sometimes get to caught up in the scoreboard during games and not just worry about what we have to do on the court, so I think if those two things become more consistent for the better than we will be a much better team."