Maine South came out of the Hinsdale Central tournament 6-6, but a better team than when it went in 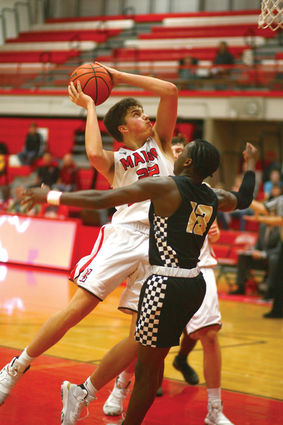 While all teams would like to come out of a holiday tournament with a championship, the Maine South boys basketball team came out of the 2019 Hinsdale Central Holiday Classic with a better sense of identity – which is the ultimate goal.

The Hawks posted a 2-2 record in the tournament, sandwiching two wins in between a pair of losses.

The final contest was a 62-56 loss to Richards in which, Maine South had double digit leads multiple times in the game, but were outscored 18-8 in the fourth quarter of the consolation bracket championship game.

"They are a very good team and I think we ran out of gas a little bit," Maine South coach Tony Lavarato said of Richards. "We had a really nice effort, we just couldn't hit some shots. We had some key possessions where we were shooting two or three times from point blank range to go back up. I love what we did up until the last two minutes."

In the finale, Marko Anderson led Maine South with 23 points and 15 rebounds, while Sean Gallery scored 12 points and Nick Ostojic finished with 10 points and nine rebounds.

"I like how we are playing," Lavarato said. "This inexperienced team is getting experience as we are going through it and at 6-6, I couldn't be more pleased.

Against Auburn, Gallery led the way for Maine South with 16 points while Casey Clark scored nine, while Anderson tallied a double-double of 14 points and 11 rebounds in the win over the Knights. Against Lincoln-Way Central, Clark added 13 points and Gallery finished with nine points and six rebounds.

In the tournament opener, Maine South fell 51-34 to Homewood-Flossmoor.

Clark paced the Hawks with 14 points, followed by Gallery with six. Anderson and Danny Locascio each tallied five points.

"The biggest thing we have to learn is that sometimes you have to fight through the fatigue. I don't go deep," Lovarato said. "We are going to continue to get better. I like our upside – I think we have great upside and I think we have come a long way in a month and a couple weeks, so I am really happy with where we are.

"We have an action-packed January and there are a lot of games we have out there that we can get. There is a path for us to have a very successful year, but we have to live in the moment. We always come out of this [tournament] a better team and at the end of January, we will know where we sit."