Lady Radiers getting healthier, stronger as the season goes on -beat Milwaukee King 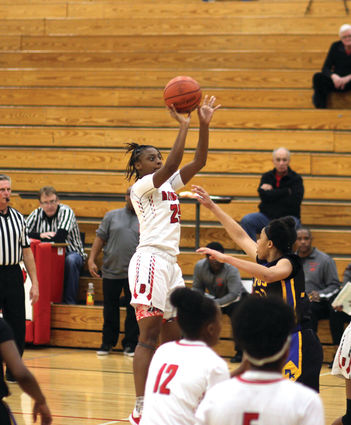 Bolingbrook is getting healthier and coming together more and more each game.

The Raiders (11-5, 0-0) came into the 2019-20 season much healthier than a year ago, as well as being more upperclassmen dominant, as they only have two sophomores on varsity with the rest juniors and seniors.

With senior forward Treasure Thompson, who will be playing in Baton Rouge for LSU next year, coming back from a torn ACL against Plainfield Central a year ago, the Raiders are back on track to compete deep into the playoffs.

So far for Thompson this season, it has taken her a bit to get reacclimated into the swing of things, but coach Chris Smith said that is normal for a player coming off such a devastating injury as she did.

"The biggest thing for Treasure has been trying to trust her knee," Smith said. "She's thinking about if she can still do some of the movements and cuts she used to be able to make, we're playing her more in the post this year so for her she has to just get physically stronger."

So far, the Raiders are on a three game winning streak which concluded in their win in the showcase, and for a team that has Thompson and senior guard Danyel Middleton, the Raiders are disseminating the ball to other players more this year which has led them to more success.

"There are still some things we need to work on like our energy and defense," Marable said. "We ran our plays pretty well today, so I would say that is the reason why we were successful in this game."

Going forward, because the Raiders pride themselves on deep playoff pushes, Marable said that in order to get to the point where they want in March, they need to continue playing together and ramp up their energy.

"We need to keep playing with that togetherness our coach always talks about," Marable said. "We understand how good we can be, it's all on us and we just have to come out every game with that high level of energy and play up to our potential that we know we are capable of."