Benet Academy suffers its second loss of the season at the hands of Iowa's Dowling Catholic, but there no need for panic 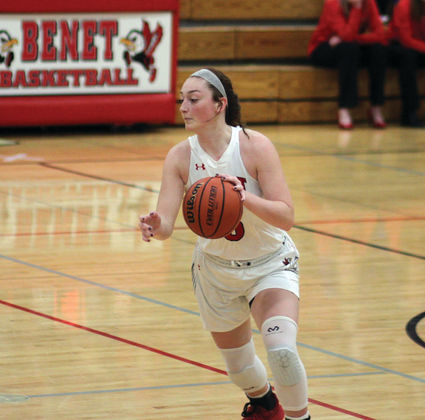 Not many teams jump out to a 23-7 lead in the first quarter against Benet Academy.

"I said to our team if we could keep Caitlin [Clark] to 20 points, I thought we would be ok," said coach Joe Kilbride.

Clark, who will be playing basketball next year in Iowa City for the Hawkeyes, scored 36 points and was just to much to handle for the Redwings.

Per usual, seniors guard Brooke Schramek and forward Kendall Holmes led the way for the Redwings, both scoring 23 points.

The loss to Dowling Catholic was something that doesn't happen to the Redwings very often, as this was just their second loss of the season.

The first loss came against Lake Forest in the Montini Christmas Tournament, where the Redwings lost by just one point.

Prior to the Lake Forest defeat, the Redwings were on their usual hot streak with 14 consecutive victories before losing two out of their last three games, but Kilbride said there is nothing to be worried about.

"I've got six seniors who are wonderful kids on and off the floor," he said. "They demand so much out of each other, we play a lot of great teams every year which helps us for conference play, if I went back to look at it there's probably 15 teams we play that will be playing in Sectionals."

One of those leaders who has been on varsity for four years is Holmes.

The senior who will playing for DePaul next year has been a leader on the court and off, and also said going forward the tough schedule will only benefit her team in the long run.

"Our schedule doesn't get any easier starting off with Simeon who's our next game," Holmes said. "We all look forward to these very intense games because we're not just playing and having fun, but we're getting better playing some of these top teams in the state all the team."