Although West is young, several players have the experience of varsity basketball 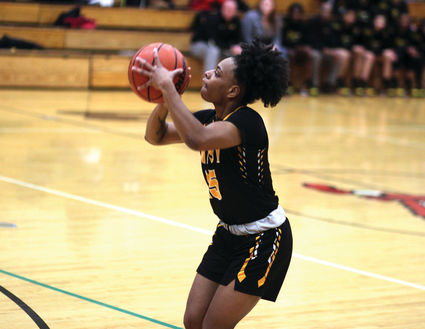 Joliet West is off to a fast start this season.

A years difference in sports can change a lot, especially when it comes to records.

"Overall we have been playing really good basketball," said coach John Placher. "All the girls I have this year have a full year of varsity experience which really helps us a lot."

Led by all-area superstar senior guard Jazz Evans, the Tigers have found success even though they are still a very young team.

The roster consists of just two seniors, and the rest are five juniors, four sophomores and three freshmen.

One of those freshmen is point guard Lisa Thompson who scored 23 points in the Tigers' recent 55-32 win over Butler Prep at the Chicagoland Invitational Showcase at Benet Academy.

Another supporter of Thompson is Evans, who said she doesn't see any reason why Thompson can't be just as good as her - if not better.

"It's great to have someone on the team like [Thompson]," Evans said. "It's crazy to think she is a freshmen, I hope she breaks every record at this school and surpasses me."

The last loss for West was a month ago when it lost to cross-town rival, Joliet Central, but since then have put together a winning streak where their confidence is at an all-time high.

With expectations this year to play into March, Placher said he understands how tough his teams conference is, and still has a lot of work to do in the future.

"This month is just an absolute grind for us," Placher said. "Everyone in our conference is good and plays at a high level, we have to finish in the top two or three in our sub-section."