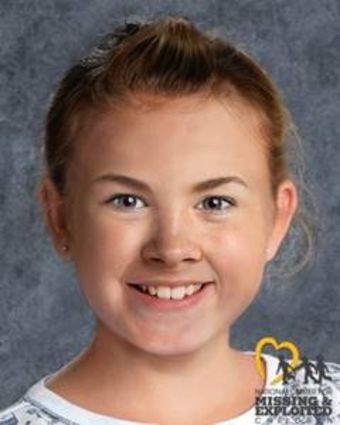 For the first time since Kayla Unbehaun's disappearance, NCMEC has just released an age progression image of what she might look like today. "We know that this new picture can helps find Kayla. It just needs to reach the right person," says Angeline Hartmann, Communications Director at the National Center for Missing & Exploited Children. "We ask everyone to take a moment out of their busy day to look at this new photo and then share it on social media. You may be the person who brings her home."

Kayla was allegedly abducted by her mother, Heather Unbehaun, from South Elgin, IL in July 2017, a few months after he was awarded full custody. This month is Kayla's 12th birthday and her father, Ryan Iskerka, has penned a happy birthday letter to her on NCMEC's blog in the hopes that it will find her, and that Kayla herself may be found using this new age progression. Kayla's mother has ties to Georgia but since they've been gone for over two years, Kayla and Heather could be anywhere.