Despite an injury to one of its top players, Notre Dame College Prep opens the season 8-2 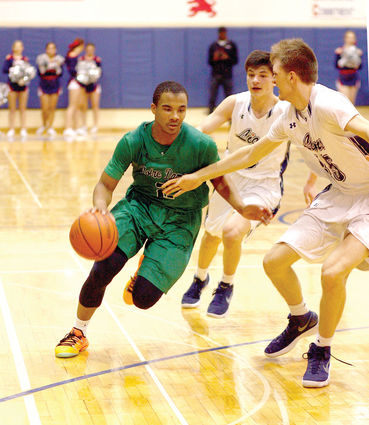 One of Notre Dame's leading returners Anthony Sayles, pictured last season, is slated to return from a knee injury soon.

In the Team Rose Shootout at Mount Carmel on Sunday afternoon, Notre Dame, met and overcame a huge challenge in its match-up with Chicago Bogan.

Sayles, has been nursing a sore knee and is expected to return to the lineup this week.

Lesmond calmly sank both free-throws and after a desperation shot misfired, Bogan (9-1) was no longer undefeated as the Dons handed then it the 58-26 defeat.

"There was a lot of pressure in that spot," Lesmond said. "I just focused out all the noise and felt like I was back at our gym and made both of the game-winning free throws. I played well but the whole team played well. We all hit some big shots."

The stars were many for the Dons, but none shined brighter than D'Amico.

After burying three long-range three pointers in the first half, D'Amico had been taken out of the game by the Bengal defense.

Burying seven of their 11 three-point shots in the first half, the Dons took a 33-26 lead into their halftime locker room.

"Our offense really worked well for me, getting me a number of wide open looks," Bergstrom said. "I was able to knock my shots down, today. Great win for us over a great team. This is the closest team I have ever played for. We really all help each other out."

Notre Dame's sixth man, Mac Ross (six points, two 3's) buried his second trey of the game and the Dons were within one, 53-52.

With the ball and a two-point lead, Lesmond traveled which allowed Bloxton to tie the game again at 56-56 with 37 second remaining. With three seconds remaining, Lesmond was fouled.

"Bogan is a great club. They really pressured us and other than the third quarter, I felt we did a great job handling their pressure," D'Amico said. "We all took our turns at hitting big shots and that's how we came out of here with the big win.

"When we fell behind by eight, we had to get stops and come out of our zone. We got the stops and Jason hit some huge shots for us."

Notre Dame handed rival DePaul Prep (7-1) its only loss of the season, 65-60, in The Battle of the Bridge rivalry on November 29.

MaxPreps Illinois' top-ranked Evanston (7-0) handed the Dons their first loss of the season at the Chicago Elite Classic 61-53. Sayles went down in a 61-40 win at Hinsdale Central on December 7.

Without Sayles, the Dons won their East Suburban Catholic Conference opener against Marian Catholic 48-36 in Niles on December 10.

On Friday night in Wilmette, without Sayles, ND lost 34-31 at the very-deliberate and undefeated Ramblers of Loyola (8-0).

"We are coming together as a team." Sayles said. "We are young and have a ways to go but it's scary how good we can be. I want to credit all of my teammates for this great victory tonight and I am looking forward to getting back in the lineup."

"We want to win the ESCC and to reiterate what Anthony said, our No.1 goal is to be in Peoria in March," D'Amico added.

"What a tremendous effort by our kids tonight to come away with this great win," Clancy said. "Louis (Lesmond) didn't shoot the ball well tonight but he went up there and nailed the game-winning free throws. Troy (D'Amico) displayed what a versatile player he is. Hitting three's in the first half and then driving inside, in his huge fourth quarter. (Bergstrom) hit a number of huge shots and Jimmy (Murphy) handled the ball for us against Bogan's pressure defense.

"We reached our first goal in winning the Lane Tech Thanksgiving Tournament championship. We want to win the ESCC, the Wheeling Hardwood Holiday Tournament and be playing for a Class 3A State Championship in March."