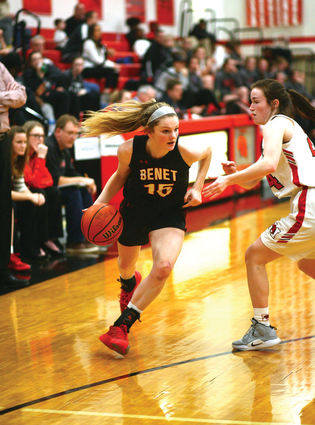 Kendall Moriarty is one of the many pieces of Benet's talented, deep 2019 team.

Back on December 27. 2018 in the 10th annual Montini Christmas Classic, the girls from Benet Academy and Fremd played a quarterfinal game that bore a resemblance, to the Chicago Bear-Green Bay Packer NFL rivalry.

To say the officials let the girls play would be an understatement.

After 32 minutes the Redwings and Vikings, both bloodied and bruised, went 12 more minutes, before the Vikings prevailed 59-54 in triple overtime. The Redwings bounced back from to win the next two days and take home the tournament's fifth-place trophy.

On Saturday night in Lisle, in the rematch the two clubs played 31 minutes and 56 and a half seconds to a 44-44 deadlock.

Fremd's 6-foot senior forward Oliva Hill (11 points, six rebounds) put the Vikings up 48-44 with 3:26 remaining in the first overtime with a basket and two free throws.

Benet's, DePaul-bound Kendall Holmes scored nine of her game-high 21 points in the last 3:26 of overtime. Her old-fashioned three-point play and steal and score with 2:32 in OT gave the Redwings a 49-48 lead they would not relinquish.

"We really wanted to beat Fremd after last year's heart-breaking loss," Holmes said. "Heading into the overtime we all felt we were going to win. Fremd is a great team, they are well-coached and they play very hard.

"Everybody contributed to this win tonight. Our ultimate goal is to get back to state but we are taking it one game at a time. We are improving every game. We are all sisters. We hang out together off the court."

"Ashley Berry is a complete warrior," Benet Academy coach Joe Kilbride said. "Fremd's Emily Klaczek (17 points) is a tremendous guard and Ashley dogged her all-night long. I am so proud of her."

"After losing to Fremd in triple overtime last year, we really wanted to have the game go our way tonight," Moriarty said. "I really pride myself on my defense and with my defense I can contribute even when my shots aren't falling. It's such a positive for us to have such a deep bench. They were outstanding, tonight."

At the end of the third quarter, Sheehan on a perfect pass from Holmes, buried her third three-pointer of the game to give the Redwings a 36-33 lead after three quarters. The Redwings missed their last eight three-point attempts of the game.

"When our schedule came out and we saw Fremd on it, we were really motivated to avenge our triple overtime loss to them last season,"Sheehan said. "It really hurt last year and we all were not going to let it happen again. Trailing in the overtime, we all rallied behind Kendall Holmes, to pick up this great win."

"I told the girls that this game would be a grinder," Killbride added. "I told the girls to continue to play hard and they did, to get the grind of a win. We wore them down with our pressure defense. We are improving every game. I really loaded up the first half of our schedule with great teams."

A game earlier, Benet handed the first loss of the season to Marist, who came into the game undefeated.

The Redwings went on the road and left a 63-55 winner.

"These have been good wins," Kilbride said. "These are not chippies, these are quality wins."

Other than the Division-I talent, Benet's success comes from the depth and skill level of the bench.

"It is depth that really fits together," Kilbride said. "Last year we were deep, but it was harder to put it together becuase of the skill sets. This year, it really fits well.

For players like Holmes and Schramek, it is refreshing to have talented players behind them.

"We have an advantage with our bench that we can go five in, five out if we are tired," Schramek said. "I think most high school teams in our area only have five or six players and we have 10 that can all really play."