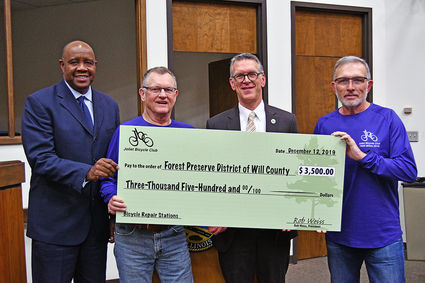 A $3,500 donation from the Joliet Bicycle Club will pay for two bike repair stations at Forest Preserve District of Will County preserve trailheads.

One station will be installed along the Rock Run Greenway Trail in Rock Run Preserve – Paul V. Nichols access at Ingalls Avenue and Essington Road in Joliet. The other location has yet to be determined.

The bicycle club's representatives, Vice President Dominick Chellino and Treasurer Conrad Brouwer, presented the donation check to the Forest Preserve at the Dec. 12 Board of Commissioners meeting.

Bicyclists who experience mechanical issues while riding on Forest Preserve trails will be able to use the tools attached to the repair stations to fix their bikes. Each repair station will consist of an air pump and bike repair tools, including screwdrivers and wrenches, attached to a post with stainless steel cables. Hanger arms on the stand will allow bicyclists to hang their bikes during repairs.

The bicycle club, which raises money for such donations during an annual Four of July Century Ride, also has paid for bike repair stations on the Old Plank Road Trail in Frankfort and along the section of the Rock Run Greenway Trail that is part of the Joliet Junior College campus.