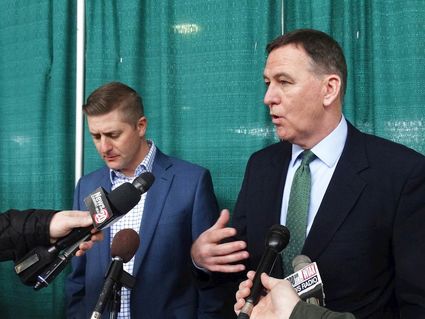 Illinois Department of Agriculture Director John Sullivan said Tuesday that interest in the newly-legalized hemp industry continues to build, but more work needs to be done for the industry to mature.

Sullivan spoke to reporters at the state's first Hemp Summit at the Illinois State Fairgrounds in Springfield where nearly 700 farmers, processors and other people involved in the hemp industry gathered to talk about what they learned during the 2019 growing season - the first season of legal hemp production in Illinois.

"People are excited. There's a lot of questions," he said. "This is an industry, I would say, in its infancy stages at the moment. We have a lot to learn and that's what our speakers are here today to talk about."

State officials won't know until next month exactly how many acres of hemp were planted or harvested, but the state certified more than 21,000 acres as being eligible for hemp planting - considerably more than officials expected.

Hemp, a close relative of the marijuana plant, had been illegal in the United States since 1937, although the federal government did encourage its production during World War II. But after decades of debate, Congress reversed course in 2014 with passage of a Farm Bill that authorized hemp production for research purposes. It then lifted the ban entirely with passage of the 2018 Farm Bill.

Under that law, hemp is only legal if it contains no more than 0.3 percent of THC, the psychoactive ingredient in marijuana. If a crop contains any amount of THC above that limit, it is considered marijuana and must be destroyed.

Some farmers grow hemp for its fiber, which can be used in a wide variety of products such as rope, cloth and even building materials. So far in Illinois, however, hemp farmers have focused exclusively on a variety that produces CBD oil, thought to have a number of medicinal uses, ranging from an anti-inflammatory treatment to controlling seizures.

That's mainly because there are not yet any industrial facilities to process hemp fiber in Illinois, and only a limited number of processors for hemp oil.

"There's a huge need for more processing capacity in the state," said Justin Ward, cofounder of Stoney Branch Ag Ventures, near Rushville - a company that provides custom farming and consulting services to hemp producers. "I have a number of farmers who are having issues with getting their product into processing, and I know what few processors we have in the state are very backed up."

As the planting season began this past spring, some people were estimating farmers could make as much as $90,000 to $160,000 per acre growing hemp for oil. But as some found out this year, the new hemp supply drove prices down.

"There was a lot of discussion about get-rich-quick," Sullivan said. "You've got to keep in mind, Illinois is not the only state doing this. Nearly every state in the country is in this process."

Even with the price drop, however, Ward said he had a successful year.

Some other hemp farmers weren't as fortunate, though. Trent Lawrence, who started growing hemp on a farm near Delavan, where he also grows organic vegetables, had the experience that all farmers dread.

"We actually had a tornadic super cell pass over our farm the day we were supposed to start harvesting," he said. "It broke all of our plants -the whole field. It touched down about a quarter-mile from our farm and went directly over us."

Lawrence said he ended up harvesting very little crop, a significant loss considering how labor- and capital-intensive hemp farming is, but he said he fully intends to try again in 2020.

"I got all the equipment now. I've got to keep doing it," he said. "Every year is not going to be as bad as this year."