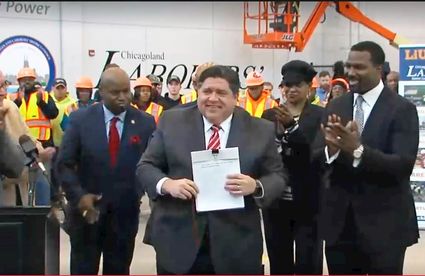 Senate Bill 177 establishes the Illinois Works Jobs Program, which makes $25 million available to community-based organizations - including public colleges and universities - to recruit new apprentices to work on construction projects. It also provides that apprentices will make up 10 percent of the labor force on all projects costing $500,000 or more. The money will come from the $45 billion in capital plan funding.

The program will be overseen by the Department of Commerce and Economic Opportunity. It is also authorized to award "bid credits" - virtual dollars that can be used when bidding on future contracts - to encourage contractors to employ "historically underrepresented populations in the construction industry," including minorities, women and veterans.

"Rebuild Illinois is the largest, most robust capital plan in state history," Pritzker said at a bill signing ceremony in Chicago. "We're working with our partners to make sure every community in the state benefits from these good jobs, especially those who've been left out and left behind for far too long."

Language of the program was inserted into a Senate-passed bill in the House during the fall veto session.

Rep. Will Davis, a Democrat from the south Chicago suburb of Homewood, was the leading sponsor of the amendment in the House.

"Several of those communities are in the 30th District and the south suburbs," he said. "So I'm pleased to have the opportunity to do something in Springfield that is going to directly benefit the people that I serve and that I represent out in the south suburbs."

\Sen. Napoleon Harris III, a Democrat from the south suburb of Harvey and the lead sponsor in the Senate, said he believes the program will pay dividends for years to families that traditionally have not had access to skilled construction jobs.

"These careers are going to be not only paychecks but health insurance, pensions, sustainable living opportunity to raise your family," he said. "This is why this measure is so important, because now we have more people involved in this process, who were historically underrepresented."

The final version of the bill passed the House on Nov. 13 by a vote of 82-32. The Senate concurred with the changes the following day, 36-6. The law takes effect Jan. 1.