Latkes are delightful dish all year 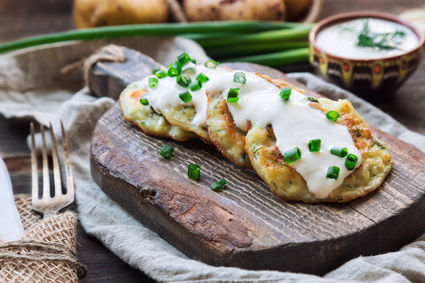 Anyone who has dined in one of my restaurants, read one of my books or articles, seen me on TV, or cooked or eaten with me personally knows that I think of the whole world as my pantry.

I love discovering ingredients and ways of cooking them that are new to me, and then mastering and sharing them with others. In the process, I'll often combine influences from various countries and ethnicities into one dish, creating original recipes in a process sometimes referred to by the contemporary term of "fusion" cuisine, which came into use in the 1970s. (Even though you could argue that fusion has happened throughout history, whenever food lovers have traveled and brought their discoveries home with them.)

But since that culinary term was first coined some four decades ago, maybe we have finally moved beyond fusion today. While national and ethnic cuisines will always remain sources of genuine pride for the places and peoples they spring from, and be cooked and served in homes and restaurants where authenticity matters, more and more people love to eat fusion-style in their daily lives.

All-American breakfast followed by Japanese ramen for lunch and pizza or Mexican for dinner. And maybe that breakfast includes grilled Italian sausage; sliced fresh jalapeÒos garnish the ramen; and crËme fraiche and smoked salmon top the pizza, as they do in one of the most popular items from my menu at Spago.

You could say that today ethnic cuisines once considered to belong to a specific group of people now belong to everyone. And our lives are richer for that shared culinary heritage.

In that spirit, I would like to share one of my all-time favorite ethnic recipes: Jewish potato latkes, traditionally served at Hanukkah, the Festival of Lights that begins Dec. 22 and continues for seven more nights. Because Hanukkah commemorates a miracle in which one night's supply of oil kept the eternal light burning for eight nights in the rededicated Second Temple in Jerusalem, dishes fried in oil - like these crispy potato pancakes - feature prominently on holiday menus.

The wonderful thing about latkes, however, is they're perfect for other occasions and other family traditions and are endlessly adaptable as well.

Make a big batch to serve with your roast at the Christmas table. Or prepare little bite-sized latkes and top them with small slices of smoked salmon or other smoked fish such as sturgeon, whitefish, or trout, or some salmon or sturgeon caviar to make the most elegant Champagne-friendly appetizer for your New Year's party. Keep on making them, as I like to do, for a reliably delicious potato side dish all year long.

I wish you happy holidays. May you enjoy the bounty of an ever-expanding global pantry.

With a swivel-bladed vegetable peeler, peel the potatoes. With a sharp knife, peel the onion and cut it in half.

With the large shredding holes of a hand-held grater/shredder, or with the large-hole shredding disc of a food processor, cut the potatoes and onions into shreds, transferring the shreds to a mixing bowl. Add the lemon juice and toss thoroughly to coat the shreds and prevent discoloration.

By handfuls, pick up the shredded mixture and squeeze it over the sink, transferring the squeezed shreds to a large clean mixing bowl. Set aside.

In another mixing bowl, combine the flour, baking powder, nutmeg, and salt and pepper to taste. In a smaller bowl, stir together the milk and egg. Add the milk-egg mixture to the flour mixture, and then pour into the bowl of shredded potatoes and onion. Stir until thoroughly combined, drizzling in the 2 tablespoons of vegetable oil or melted butter as you stir.

Heat a large heavy skillet over medium-high heat. Pour in enough peanut oil to form a thin, even layer in the pan. With a large spoon, scoop up some of the potato mixture and form round pancakes, large or small as you like, in the pan, taking care not overcrowd the pan.

Fry the pancakes until deep golden brown, 3 to 5 minutes per side, turning them once. Transfer to the paper towel-lined baking sheet to drain briefly on both sides.

Meanwhile, start cooking another batch of pancakes. While they cook, transfer the cooked pancakes to the foil- or parchment-lined sheet and put in the oven to keep them warm. Continue frying, draining and warming the remaining pancakes.

When all the potato pancakes are done, arrange the pancakes on a serving platter, garnish with the sprigs and serve with applesauce and sour cream or crËme fraiche.

thanks for sharing this is really helpful for me and also for my upcoming project. so i hope you to add some more in future also