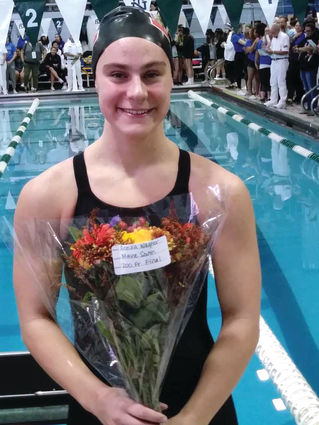 That's why the Northwestern recruit decided not to defend her state championship in the 200-yard individual medley this year.

"Swimming for me is all about setting my goals and achieving them," Wagner said. "My goal for high school swimming was to win the 200 I.M. and make the state record and I did that last year.

"So I didn't think it would be as fun to do that event and not have as many high goals in there. I thought it would be fun to try something else."

That's exactly what Wagner did, switching to the 200 freestyle to pair with her other event, the 500 free. She finished second in both.

Wagner would have won state titles in both events if not for Neuqua Valley junior Rachel Stege, a Georgia recruit who set state records in both races at the state meet at New Trier.

"Her improvement curve is amazing," Wagner said of Stege. "She's got so much left ahead of her.

"She's going to have a great career, so it's fun to swim next to her. It's like an honor to be keeping up there with her."

Wagner actually dropped time from Friday to Saturday, shaving .58 off her prelim time in the 200 and .78 off her 500 clocking.

"I would say the 200 free is probably my second-best event anyway, so I've always wanted to swim that event in school season," Wagner said. "It was fun."

It was a satisfying ending to a great prep career for Wagner, who graduates with eight state medals, all in individual races. She is second on Maine South's career medal list behind Courtney Madsen, who won nine medals between 1981 and 1984.

But Wagner has more individual medals than any other Hawk.

"Senior year is all about having fun," Wagner said. "I'm glad it's over but also it was a fun ride."

It was a ride that saw Wagner put a Maine South program that hadn't produced a state medal-winner since 1987 back on the map. She finished with one state title, four runner-up finishes, two fourths and a fifth.

"We've had relays make it to state the past three years and this year we (got) two of our relays to state and that's a big achievement for us," Wagner said. "We were really proud of ourselves. It's fun to be a part of a team that's growing."