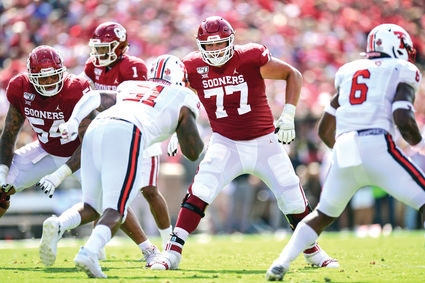 Erik Swenson found a home at Oklahoma after having scholarship at Michigan pulled.

In 2013 as a sophomore at Downers Grove South, under then-Mustang and current Minooka head coach John Belskis, offensive lineman Erik Swenson made a verbal commitment to the University of Michigan – the team he rooted for growing up.

By the end of his senior season, Jim Harbaugh had replaced Brady Hoke as head coach of the Wolverines, Swenson’s scholarship was rescinded and he found himself without a team just weeks before signing day.

It didn’t take long for Swenson to find somewhere to play, however, as he chose to attend the University of Oklahoma and history has proven that everything worked out for the better.

Swenson redshirted his first collegiate season, but during the first three years in Norman, OK, the Sooners posted a combined record of 35-6, won three Big 12 titles and finished in the top five in the nation in both the Associated Press and Coaches Polls every year.

Over that same time frame, the rebuilding Wolverines have gone 28-11 and finished no better than 10th in the nation.

This season, Oklahoma is 11-1 on the season and looking to play its way into the Football Four as it will face Baylor in the Big 12 Championship game this weekend.

Oklahoma handed Baylor its only loss of the season in mid November when it came back from a 25-point defecit to win 34-3. championship games, winning college football’s top prize after the 2017 season.

“It has been pretty crazy blocking for them and seeing their progressions,” Swenson said. “I was closest to Kyler and seeing his progression over the years and he turned into a really good player and Jalen this year has done a really good job and working hard to be the best he can.”

While he has had fun working for the skill players upfront, Swenson said it was his fellow linemen that he has had the best time with.

“The quarterbacks have been impressive, but looking at the guys in front of me on the offensive line has been great,” he said. “Orlando Brown is a starter for the Ravens and is doing a great job there and Bobby Evans got his first career start with the Rams and did a great job, Cody Ford playing for the Buffalo Bills and Dru Samia and Ben Powers – those guys were all great mentors and great friends and I am super happy to see them having success in the league. They were great mentors on the field with what technique to use and how to read a pass rusher and how to study film, but honestly, the biggest take away was what they did off the field – always did the best they could in classes, always got in an extra strength time with the coaches.

“Our offensive line had a big rebuilding year this year and we had to replace four starters and we looked at what the guys before us did and how they were just as successful on the field as they were off.”

As a redshirt junior, Swenson has another year of eligibility left next season and could stay and get even better on the field and hopefully follow his fellow line alums into the NFL, but for now, the focus is on Baylor and a shot at a berth in the final four.

A win over the Bears could would potentially be enough with the resume of wins this season. With Utah also being a one-loss team and the current No. 4 team, the Sooners may need some help from Oregon to earn the right to compete for a national championship.

“It has been pretty good season,” Swenson said. “We are right where want to be. We are making the fight towards the end.”

After redshirting his true freshman season, Swenson saw action in 10 games over the next two seasons combined and has played in nine of the Sooners’ 12 games.

“It has been a good couple of years, but this year has been the best as I have been getting some good playing time and developing myself on the field,” Swenson said. “Everything worked out fir the best. When one door closes another one opens.”

While he has been on the Oklahoma offensive line, Swenson has had the opportunity to block for Baker Mayfield and Kyler Murray, both Heisman Trophy winners and both No. 1 overall draft picks in the National Football League, Mayfield by the Cleveland Browns and Murray to the Arizona Cardinals.

This season, he has blocked for Jalen Hurts, a graduate transfer from the University of Alabama where was part of three national