Village of Shorewood braves the rain, lights up the city 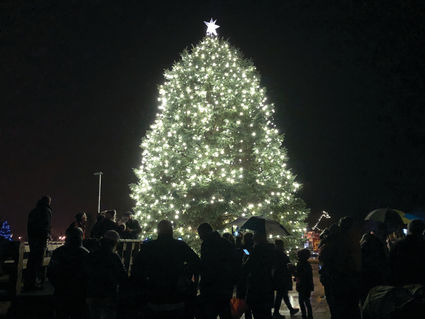 Though heavy rainfall, more than 100 Shorewood residents turned out Nov. 26 for the village holiday tree lighting.

For most of the month, the public works department spent some time clearing the space in front of the Village Hall and setting up the large tree which arrived the previous week on a semi-truck.

As Santa Claus began walking to a flatbed truck parked near the power box, he received cheers and applause from many kids lining the sidewalk.

But it seemed Mother Nature gave Santa the biggest greeting as the rain stopped just as he climbed onto the platform.

“Santa made the rain stop,” Chapman said. “We sent a letter saying we’re going to light the tree. We know you’re busy this time of year, but you’re invited.”

After the mayor led a singalong of “Winter Wonderland,” there was a quick countdown and 2,750 lights were turned on by members of the Salato family, who donated the tree.

Many families took pictures in front of the tree while others rushed inside the village hall for free hot chocolate.

The village hall also has many smaller trees that have been decorated by local businesses for the Festival of Trees and are on display throughout the holiday season.

Santa Claus went inside for pictures too. And right on cue, the rain started up again.