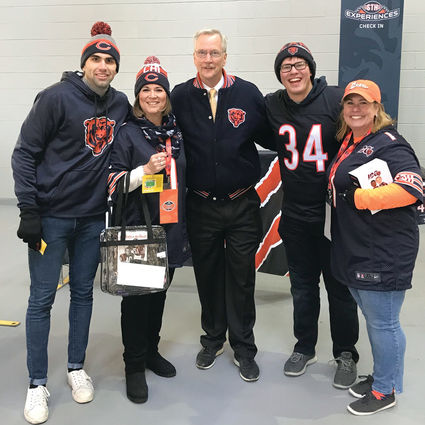 There are two kinds of heroes - fictional and non-fictional.

The two sixth grade teachers at Meadowview Elementary School in Woodridge School District 68 were recently presented with the Symetra Heroes in the Classroom award.

"I've been teaching for 27 years," Bell said. "Maggie and I new each other from junior high, it's awesome to work with someone you're friends with, you respect and you trust."

For Nickels, she has been teaching for 31 years from kindergarten to eighth grade.

"I was very fortunate to build a relationship with Mrs. Bell both professionally and socially," Nickels said. "We've been teaching sixth grade as a team for two years now."

The "Batman and Robin" duo were selected by the Chicago Bears from hundreds of other nominations to receive this award, and only 16 teachers from the Chicago-area per football season are selected.

"The reason that we won this award is because of the relationships we have with all of our students," Bell said. "Even after they leave, we make it a point to keep those relationships and for those students to understand we will both always be here for them."

They each received two tickets to the game and VIP sideline access to the field during warm-ups to meet the players, and they both also were presented with their own personalized Bears jersey and other prizes. "We had the opportunity to sit with some of the people from the selection community at the Bears game," Bell said. "They told us the history of the award and we both really enjoyed that."

Although this award has been presented in the past, the duo did something no one else has ever done, receive the award as a team.

"We were recommended for the award as a team, so that was pretty neat to hear," Bell said.

The way the two teachers found out about the award was at their recent school assembly.

"There was an assembly that was planned without our knowledge and it was third through sixth grade," Nickels said. "When we walked in we had a sense something was going on but we had no idea they were focusing on us.