Skillicorn questions whether public can trust Legislature without changes 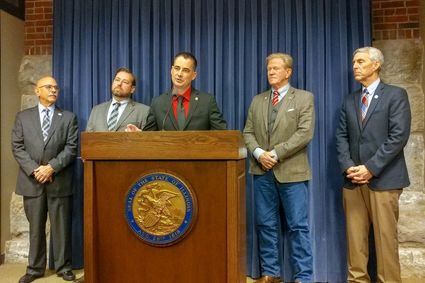 A handful of Illinois House Republicans on Wednesday called for a special legislative session – or at least greater urgency in the upcoming regular session – to pass reforms to state ethics laws.

"How can this government possibly move forward with credibility without robust anti-corruption safeguards in place," Rep. Blaine Wilhour, R-Beecher City, asked during a Capitol news conference.

He was joined by four of the more conservative members of the House GOP caucus in arguing that a flurry of investigative activity and federal charges filed against a pair of sitting lawmakers make clear that reforms to state ethics codes and economic interest disclosures are needed to return the public's trust.

So far this year, Rep. Luis Arroyo, a Chicago Democrat, was arrested for bribery before stepping down and Sen. Tom Cullerton, D-Villa Park, was indicted on embezzlement charges. He remains in the Legislature. Several other Statehouse regulars, including Sen. Martin Sandoval, D-Chicago, have had their homes or offices raided by the FBI. Sandoval announced Nov. 27 he was resigning effective Jan. 1.

An ethics commission and lobbyist disclosure bill which passed in the final days of the fall veto session were not nearly enough to reinstate public trust in government, according to Rep. Allen Skillicorn, an East Dundee Republican who spoke during the news conference.

Skillicorn called the issue bipartisan and addressed recent news reports that alleged Senate Republican Leader Bill Brady appointed a member of his caucus to the newly-created ethics reform commission in exchange for the lawmaker not speaking publicly on a conflict of interest bill he planned to file.

WCIA-TV in Champaign reported that Sen. Jason Plummer, R-Edwardsville, turned down a spot on the ethics commission because he believed Brady offered him the position on the condition he not file a bill that would prohibit lawmakers from receiving payment from "privately held gaming enterprises" such as those that deal in video gambling.

In May, ProPublica and WBEZ of Chicago reported that Brady, of Bloomington, "is listed in internal gaming board records as a 'person with significant influence or control,'" over Midwest Electronics Gaming, one of the largest video gambling companies in Illinois. That story also said Brady "receives a percentage of the proceeds from video slot and poker machines under a revenue-sharing agreement with Midwest."

In a statement Tuesday, Brady said "specific legislation was never discussed" in his appointment process, and "I have always, and will always, put the caucus first in my role as leader."

On Wednesday, he released a statement to Capitol News Illinois saying he is "a strong supporter of the constitutional provision that allows for a citizen legislature, which benefits the residents of Illinois."

"And while I do not want to lose focus on the criminal allegations surrounding other members of the General Assembly, I do believe the Joint Commission on Ethics and Lobbying Reform must engage in a comprehensive discussion on all outside income and employment. It should not be confined to, nor single out, one profession," he said in the statement.

"It isn't good enough just to abstain from a vote, which I noticed doesn't happen in most of these cases," he said. "But when you're crafting backroom deals, when you profit from them, that is a bridge too far for the people of Illinois. ... But that answer could go to both the speaker and other people, but also Minority Leader Brady, and that is a big concern."

Steve Brown, a Madigan spokesperson, said any legal work done by Madigan "deals with value of property not taxes."

"As to legislation that might deal with assessment, he either recused himself or voted in a way that would be against the interests of property owners," Brown said in an email. "He does not use his public position to benefit the law firm or clients of the firm."

Skillicorn also pointed out the ethics commission was scheduled to report to the General Assembly in March, after primary elections concluded.

Pritzker signed the pair of ethics bills criticized as weak by Republicans on Wednesday. In a statement released later in the day, he said more is needed.

"While we took important steps in November to tighten ethics requirements and improve transparency, it's critical to take additional action to end the unconscionable self-enrichment and corruption that has been uncovered. I expect this commission to deliberate swiftly and report their recommendations with the greatest possible urgency."

At an unrelated news conference Wednesday, he said it "doesn't make a lot of sense" to try to accomplish all of the needed ethics reforms in a "quickie special session" or in the veto session which just passed.