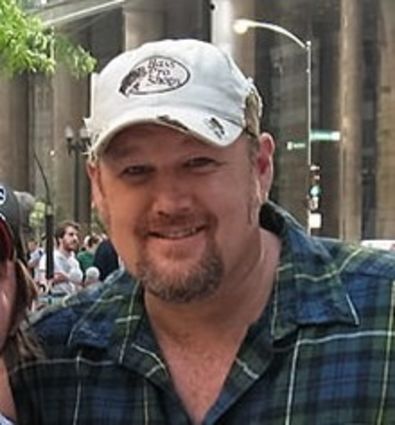 That doesn't really have the same ring to it as Larry the Cable Guy, but that was the dream of a young Dan Whitney.

"I wanted to be a cattle auctioneer and then drive a potbelly hog hauler - that was my big goal," Whitney said. "I remember when I was a kid, I got in trouble because I kept calling the radio stating in Omaha long distance to request the song 'Convoy' by CW McCall and my mom and dad would get mad at me."

Later in life, Whitney was bit by the comedy bug, created the character Larry the Cable Guy and the rest, as they say, is history. "I used to do a ton of characters on stage and I enjoyed that and it was by happenstance. I did the cable guy installer on stage back in the late 80s and a buddy of mine had a morning show and I would call in and it became a popular part of the show.

"I had a guy book me in Sarasota as Dan Whitney a.k.a Larry the Cable Guy and it was all theater of the mind. My act was all slapsticky and the character spoke a lot slower and I went on stage and people were yelling out my catch phrases from the radio and after the first show, I started to sign autographs and take pictures and it was crazy. He then asked if I could do my whole show like that and I did. The reason I liked doing the character on the radio is that it forced me to write jokes. When you travel doing standup and you get 45 minutes to an hour, you go to different clubs and everyone sees you for the first time and you get lazy. This forced me to write jokes and I had a ball with it. From there I got more radio shows and worked the comedy clubs and then I got on Blue Collar (Comedy) and it really took off."

Whitney will bring his character and one-liner comedy to the Rialto Square Theater in Joliet for two shows on Saturday, Dec. 7, where he will be filming a special for Comedy Dynamics.

It is not the first time Whitney has played the Rialto, which is one of the reasons he chose Joliet for the filming.

"I loved the acoustics and love how it looks - it is just the perfect place to film," he said. "I made the mistake when I filmed 'Right to Bare Arms" at the Verizon Wireless Center in Houston, TX and the place was huge. The CD was good and the jokes were good, but there is a difference between hearing people laugh in a smaller room than in a bigger room, just for timing and the sound. I like the smaller theaters, so it is going to be a really good time and a lot of fun."

After he realized that he would rather be on stage making people laugh than selling livestock, Whitney started in the late 1980s as a slapstick comedian trying to find his way in the business - along the road, Larry the Cable Guy was born.

"People think I was an overnight success, but that came with a lot of work. I called radio stations five nights a week for 13 years to get to where people knew who I was and then travel around in my car and stay at a Roadway Inn. I started doing this in 1985. I quit my job in May of 1988, I was working as a bellhop and making really good money, and I remember thinking I just wanted to make enough money to make a living - I had a figure in my head and thought if I could make X amount for the year doing stand up, how awesome would that be. Next thing you know, boom, here is a book deal and movies and the truth is, I never pursued any of it."

While Whitney does not talk with the exaggerated accent as Larry the Cable Guy and wears sleeves on his shirts, the persona was still created from his life on a farm in rural Nebraska.

"It's not like I don't know the lifestyle, I grew up on a pig farm in a town of 1,200 in southeast Nebraska and moved to Florida when I was 15 and a lot of people don't understand that Florida is south of Georgia," Whitney said. "I was a farm kid and when I moved down there, I spent time at country and hung out with the Florida crackers. Its not like I grew up in an apartment in New York and decided one day I was going to be a redneck for the rest of my life. I grew up just like the character that I am talking about."

Over the last few years, Whitney said he has taken a step back from being Larry the Cable Guy and focused on being dad.

"I have been pretty blessed. Right when I got popular, I got married and my wife was able to go with me everywhere I went and when we had kids, they were able to go everywhere, so it has been a pretty good deal," he said. "I was on the road 285 days a year for 12 straight years and my kids grew up on a tour bus. I am 56 and when I hit 50, I told my wife I was only going to tour a lot for a couple more years and that is what I did, because I didn't want to miss my kids growing up."

Only doing limited shows a year these days, Whitney said he cherishes each time he is on stage, however, that is something he always did. "When Steve Martin put his comedy book out, he said the one thing he would have done when he was just doing standup was that he wished he would have enjoyed it more. I took that to heart," Whitney said. "Back in the day, I was playing to 10 or 12,000 people a night. It was like a rock show. You showed up and there was security and you pretty much hung on the bus all day or went into the arena and did something. When I read that, I decided to start to enjoy it more and take it all in. Brad Paisley told me he did this, so we started to do this - we would finish the show and change and sometimes we would go back in the arena watch them take down the stage and the lights and talk about the night. I really enjoyed it."

"I enjoy what I do. I am one of the few guys that does stand up now that keeps the one-liner type comedy alive where it is the setup, the punch, the setup, the punch - there are not a lot of guys that do it. You can count them on one hand," Whitney said. "Everything just happened, I didn't really plan it that way. It was pretty nuts. I am glad I got (his catch phrase, Git-R-Done) copyrighted, I know that much. I finally made a good decision."

When not on stage these days, his decisions revolve around what club to hit from 150 yards out and if he wants to get properly dressed.

"I love golfing and I got into golf about nine years ago because it is fun and I enjoy it. I told my wife I am sabotaging my own comedy career so I can golf," Whitney said. "I have been offered five game shows and turned them all down, I was offered 'Dancing with the Stars' twice, turned it down. I was offered 'The Masked Singer' and turned it down. I am turning down all this stuff because I don't want to leave.

I like just staying home with my kids. That is why I love stand up because I can get on stage and satisfy my need to make people laugh and then stay home and do other things I need to do.

"I am 56 years old and if I have to go somewhere without my sweatpants on, I ain't doing it."