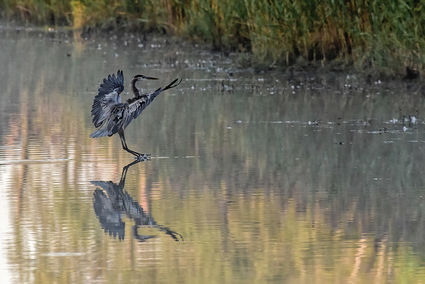 A great blue heron fluttering feet first into the water at Colvin Grove Preserve in Joliet landed in first place in the November portion of the Forest Preserve District of Will County's Preserve the Moment photo contest.

The photo was taken by Mark Rupsis of Joliet. Rupsis said he often bikes through Colvin Grove with his wife, Celeste, but this time he decided to hike the Rock Run Greenway Trail to see if he could spot some deer at the edge of the water.

"I stood at the edge of the pond and I could see the heron coming in from my left," he said. "I brought my camera up and said, 'Here we go!' I snapped off five pictures as it was coming in for a landing. This was the best of the five."

Rupsis is an architect and he said he is always on the lookout for interesting visual scenes in nature. "You don't realize how much beauty there is in the area until you start walking the trails. If you keep your eyes open, you can see a lot of things."

Honorable mentions for November were awarded to: Michelle Wendling of Joliet for a picture of glowing golden carrion leaves at Hadley Valley in Joliet; Amy Miller of Joliet for a photo of two deer sniffing each other's snouts at Rock Run Preserve in Joliet; David Gruver of Lansing for a snapshot of a red fox speeding across a field at Goodenow Grove Nature Preserve in Crete Township; and Eileen Capodice of Minooka for a picture of a wondrous wintry landscape at McKinley Woods in Channahon.

All of the contest's photo entries can be viewed on the District's Flickr page, Flickr.com/WillCoForests.

Rupsis' photo will compete with eight other monthly finalists for overall honors once the contest concludes on Dec. 31. The top three finishers will be determined by voting at Facebook.com/WillCoForests. The overall winners will receive MasterCard gift cards worth $500 for first place, $250 for second place and $150 for third place. Monthly winners receive $75 gift cards.

The photo contest is sponsored by The Nature Foundation of Will County. For more information on the contest, including the rules and a submission link, visit ReconnectWithNature.org.