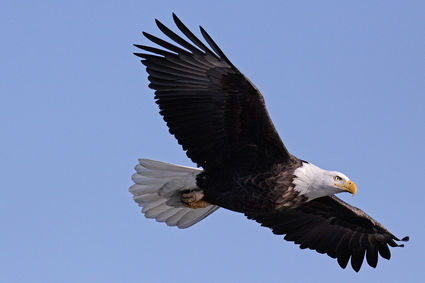 The eagle watch will be held from 10 a.m.-4 p.m. Friday, Jan. 3, and Saturday, Jan. 4, at Four Rivers Environmental Education Center, 25055 W. Walnut Lane, Channahon. The annual event has been expanded for 2020 to mark the grand reopening of Four Rivers, which will have regular public hours for the first time starting Friday, Jan. 3.

New to the eagle watch event this year are free "Birds of Prey" shows presented by Hoo's Woods Raptor Center at 11 a.m. and 1 p.m. each day. The shows will feature an eagle, other raptors and possibly a snowy owl. Seats will be available on a first-come, first-served basis in Four Rivers' Illinois River Grand Hall.

Thirty-minute guided hikes of less than 1 mile will be led by naturalists throughout the two-day event. "It's a great opportunity to get outside before the kids have to go back to school," said Erin Ward, a Forest Preserve interpretive naturalist.

Lil Deb's food truck will serve chili, hot dogs and hot chocolate from 11 a.m.-3 p.m. each day. Inside Four Rivers, various rooms will be devoted to eagle-oriented activities, including the showing of the PBS documentary "American Eagle" every hour and a large nest-building activity for kids. An outdoor nature-oriented scavenger hunt also will be offered. Indoor viewing scopes and binoculars will be available. And visitors enter to win a grand reopening drawing.

Four Rivers is located near where the Des Plaines, DuPage and Kankakee rivers meet to form the Illinois River. Because of its proximity to water, the site has become a place where eagles live year-round and gather in greater numbers during winter, Ward said.

"We've seen up to 13 eagles at one time, depending on what's frozen around here," she said. "When all of the tributaries to the Des Plaines River freeze up, that's when we know we're going to see them. And we've been seeing them since early December, but I think those are our resident eagles."

State officials say Illinois hosts more wintering bald eagles than any other state outside of Alaska with an estimated 3,100 making the trek south each winter. "The first eagles of the season are spotted in Illinois in December and remain in residence until they migrate back north in March, with January and February (being) the optimal time for visitors to see eagles," according to the state's Save our Eagles website, www2.illinois.gov/sites/eagles.