Benet's Monson repeats as Player of the Year 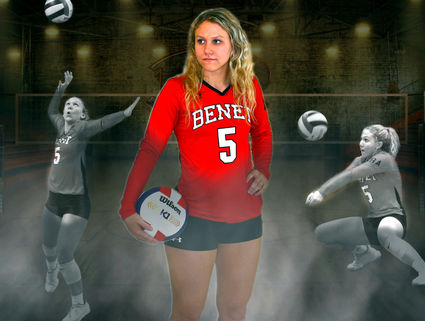 Does someone's name truly define them?

In the case of Benet Academy senior Hattie Monson, the answer is a resounding yes.

Monson said her parents chose her name as they drove through Hattiesburg, Mississippi and liked how it sounded.

However, by its American origin, the name means "Home Ruler."

A self-admitted gym rat, Monson made the Benet volleyball court her home the last four years and she ruled it with authority.

For her efforts, she was named Enterprise Publications Volleyball Player of the Year for the second consecutive season.

"She is special," said Benet Academy coach Brad Baker. "It is easy to recognize the kids that pound volleyballs and it may be hard when you only see small glimpses of her. As a coaching staff, we get to see her on a daily basis."

Helping her teammates get the glory is something Monson takes pride in.

"Being the one that gets the balls up so they get their kills gives me so much joy, so being the one that puts my body on the line for my setter and my hitters, I love doing that," she said. "I have always been a gym rat and I love to be on the floor, so being a libero was meant for me.

"My freshman year as a (defensive specialist), I learned what it was like to be a Benet libero and I realized ho far behind I was and how hard I had to work to get my skills better and be in that legacy of Benet liberos and to win a state title doing it."

That legacy was following not one, but two NCAA Division-I liberos that came before her.

"There are people that say they want to be like Haddie, but are they willing to put in the work? Very few kids are," Baker said. "We have had some who have – Tiffany Clark and Caroline Wolf - that have put in the time if you want to be that good. It is dedicating long hours in the gym and she has done it since she has been a little kid and she loves it. She is a gym rat.

If we told her that we would win a state title if she ran through the wall, she would just ask which one. I can go on and on about all the great plays she makes and how great of a kid she is. She is still humble. She makes normal plays look super easy, she makes difficult plays look easy. If she gets a touch on the ball, we are getting a swing."

With the Redwings' title this season, Monson earned her first career IHSA state title in her last chance before she heads to play at the University of Notre Dame.

"This is the last time I will wear the Benet jersey. This was four years in the making and I tried to cherish every moment," she said.

The rest of the 2019 Enterprise Publications All-Area girls volleyball team is:

Senior libero tallied 448 digs and 29 aces for the Indians and was named to the all-Southwest Prairie Conference first team.

"Mia led the team in digs this season and was the strong force to our defense," said coach Carrie Prosek. "She is one of the hardest workers and competitors on the team."

Junior outside hitter posted 374 kills, 132 digs, 43 blocks and 10 aces this season. She broke the Minooka school record with 27 kills in one match.

She was first-team All-SPC and has already committed to University of Central Florida.

"Heidi led the team in kills as a junior and also as a sophomore, she was a six-rotation player and being 6-3, she has a great reach and shots and has really developed into an amazing player," said coach Carrie Prosek. "She really stepped up during IHSA playoffs and we are excited for her return next year."

"I don't think we would have won half the matches we did without Madison's skills. She is a really smooth player who reads well and is able to control the outcome of a match through her strong defensive, serve receive, and all-around ball control skills," said coach Mark Wasik. "She was also a scoring threat from the service line. I had several coaches tell me throughout the season how much she was a difference maker for our team."

Senior setter notched 988 assists, 231 digs, 37 aces and 33 total blocks this season as she was named to the All-Southwest Prairie Conference team.

Junior opposite side hitter tallied 186 kills, 22.5 blocks, 41 aces and 95 digs. Is committed to play collegiately at New Hampshire. Was named to the all-SouthWest Suburban Conference team.

"She made the move from middle to opposite and used her slides to light up defenses all year," said coach Nick Mraz.

Senior outside hitter led the state champion Benet Redwings to the Class 4A state title. She was tops on the team with 260 kills, while posting 86 digs, 38 blocks, 33 aces and 11 assists.

"Sophie is elite jumper with a super fast arm," said coach Brad Baker. "When we needed points in big situations we went to her. She was able to hit over blocks and hit different angles that defenses had trouble dealing with."

"She is a captain who brings a calming effect to her teammates and knows how to run an offense. If she did not come back so quickly from her injury, we probably would not have gone to state. She is the glue player who holds the team together."

Sophomore outside hitter that was not originally slated for the varsity lineup, but posted 177 kills, 19 aces, 127 service points, 10 blocks and 162 digs.

"Riley has been a Godsend this season. I never anticipated her being on the varsity this year, but because of all our injuries, she stepped into the No. 1 outside hitter position and delivered results starting with her very first match against Mother McAuley getting 11 kills," said coach Scheibe. "She works harder than any other player on the court and has really improved her passing and defense throughout the season. She has a very effective serve and has gotten on several key service runs during the post season. She is only going to get better and better."

The University of Wisconsin Green Bay commit was a four-year varsity starter and three-year team captain for the Mustangs.

She was named MaxPreps Top players in Illinois in 2019.

"Addy has led the program by running a 5-1 the past three years and leads the area in assists," said coach Kristee Conrad. "Additionally, Addy has made huge strides as a strong defender and phenomenal server as well in her career at South."

"Kayla plays elite libero level defense and passing, but also masscards as one of the best OH in our area," said coach Brad Baker. "Her overall ball control for an outside hitter was unparalleled in our area. The fact that she lead our team in kills also shows what type of hitter. She has all the shots and can hit them with power."

"Rachel is one of the best setters in the nation. She sets the ball with a fast tempo, with elite level accuracy," said coach Brad Baker. "Add in her height which allows her to attack and block, and she is the complete player. Not only did her tempo and decision making, make it hard for other teams to stop us, her offense was something that other teams had to game plan for.

Senior University of Minnesota commit, she posted 479 Kills, 326 digs, 39 aces and 38 blocks on the season.

Senior middle hitter finished the season with 147 kills, 25 aces and 84 blocks. She was MVP of the Wolves and all-conference in the Central Suburban League South.

Spent all four years on varsity.

She has committed to play next season at Southern Illinois University.

"She was our volume hitter and often went six rotations to become a back row threat. She was a leader not only on the court but off as her positivity was infectious when her team needed it most," said coach Nick Mraz. "She helped lead Lockport to an overall record of 26-12 despite a very tough schedule and back-to-back regional championships for the first time since 2005-2006. She was named SWSC All-Conference and team MVP for a second consecutive year."

The two-year JCA captain is committed to play at Lewis University next year.

Ray was named to the East Suburban Catholic Conference All-Conference Team and was an Illprepvb.com 101 reason to watch volleyball. She made the Metea Valley/Oswego East Kickoff Classic and the Autumnfest All-Tournament Teams.

"She has been a dominating force for us this season and helps to open up our outside hitters because our opponents' middle hitters must stay with her and honor her talent," said coach Christine Scheibe. "She is a valuable asset to this team and I think she is the best middle hitter that I have seen this season."

Three-year varsity setter set a Minooka record in 2019 with 1,021 assists to go along with 232 digs, 47 aces, 105 blocks and 59 kills. She also holds the school record for sets in a career with 2,782. Her career assist mark places her 10th in Illinois history, while her mark this season puts her in Illinois' top 20.

Seput was MVP of the Southwest Prairie Conference and was all tournament at the Plainfield North Crimson Challenge, Mother McAuley Asic Challenge and Plainfield Central Harvest Fest.

She is a member of the AVCA All-Region Team and Under Armour Honorable Mention.

She will She will continue her career at University of California Riverside.

"Zoey has been a three-year starter on varsity leading our 2017 team to a Class 4A state runner-up championship as a sophomore and our 2019 team to an Elite 8 finish as a senior. She was the key leader all three years, breaking school records for season and career," said coach Carrie Prosek. "She is very athletic who blocks and plays like she is over six-foot. She is very hard to read on the court running our 5-1 offense. Zoey is the best setter Minooka has ever had and she is the best setter I have ever coached and will be tough shoes to fill."

Junior outside hitter converted from a three-rotation middle to a six-rotation outside hitter as a junior. She is on the Under Armour All American Phenom List. Shroba was named to the all-SouthWest Suburban Conference first team and was team MVP.

"Lauren is an integral part of our program and is our hardest worker in the gym," said coach Molly DeSerf. "She is also a leader in the classroom with a 4.45 GPA, as well as a member of National Honor Society."

Played three years on varsity for the Tigers after spending her freshman year on the varsity team at Providence Catholic.

Sophomore outside hitter, she totaled 410 kills, 22 blocks, tied for second on the team with 276 digs and was tied for first on the team in aces with 37.

"She was a six-rotation player handling serve receive and defensive responsibilities like a seasoned veteran given that a year ago, she strictly played middle blocker for us," said coach Mark Wasik. "She was our go-to hitter who carried the offensive load for us throughout the season."

A 6-foot, 3-inch sophomore outside hitter, she posted 345 kills, 264 digs, 41 total blocks and 32 aces as she was named to the All-Southwest Prairie Conference team.