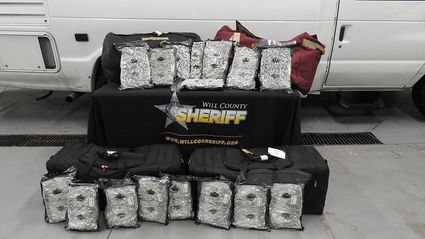 On November 18, 2019, at approximately 8:30am, deputies from the Will County Sheriff's Office, Criminal Interdiction Unit, were conducting patrol on Interstate 80 when they observed a recreational vehicle with the windshield wipers turned on because of rain but the vehicle did not have its headlights on as required by law.

A traffic stop was conducted at I-80 and Briggs Street in Joliet. Deputies spoke to the driver, Michael Glenn Silliman, age 64, of 2402 Delaware Street in Huntington Beach, California.

He was the sole occupant in the vehicle and stated he was coming from California to visit friends.

While speaking with Silliman probable cause to search the vehicle was determined and performed.

Found inside the 1997 BMI 110 Recreational Vehicle was:

*6.1 grams of methamphetamine and a pipe

He is being held at the Adult Detention Facility where he will appear in bond court today. The seized cannabis holds a street value of about $600,000.