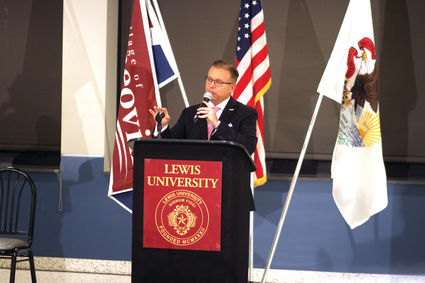 One of those is that they were awarded a $75,000 check for its Innovation Hub (business incubator).

Illinois Governor J.B. Pritzker, among other mayors, stopped by Romeoville to speak about the grant that Lewis was awarded, while Pritzker presented the check.

"This is the presentation from the U.S. Conference of Mayors and Wells Fargo for their community and grants program," said Mayor John Noak. "It's really important because it's the story on what we're doing with the incubator."

The Hub was selected as the 2019 CommunityWINS Grant Award winner in the Small City category for Economic Development Initiatives, where CommunityWINS has awarded $1 million to different surrounding cities.

Romeoville was one of just eight cities in total to receive the prestigious award, with 139 applicant cities being options.

"Myself and the village have really been the spearheads for this effort," Noak said. "It's been a multijurisdictional effort to create a business incubator at Lewis University and take advantage of their resources in conjunction with them."

Noak went on to explain how the grant money will help growth and opportunity in Romeoville, and surrounding cities of Romeoville as well.

The grant money was first applied for at the beginning of 2019, where Noak applied for the CommunityWINS Grant Award before the January Mayors Conference' national meeting in Washington D.C.

Noak also added that the Innovation Hub will be able to help local entrepreneurs with resources and information to help make business ideas and projects come to fruition, which Noak said will hopefully help stimulate more jobs and lead to a larger and much better economy. 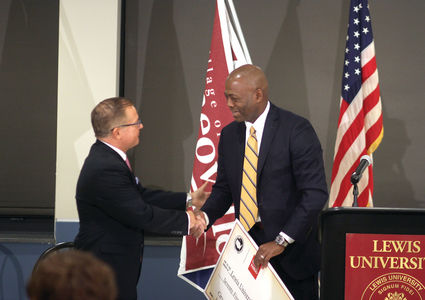 Noak gets presented check at conference.

"It allows those businesses in the start up phase access to resources at Lewis in a very affordable way," Noak said. "There's a relatively small fee to be a part of the program where they will have to apply and we're finalizing those going into December and January."

The small fee Noak was alluding to that clients will have to pay is $3,000 or more, and in December or January, the program is supposed to start according to Noak.

A part of the program will be more workspace including shared workspace, access to labs, helping to hire employees and mentoring sessions.

"The funding will help with all that and the marketing which will get all of these businesses up and rolling," Noak said. "For the University it show cases them and the resources they have which those resources will be available to their students and faculty as well."