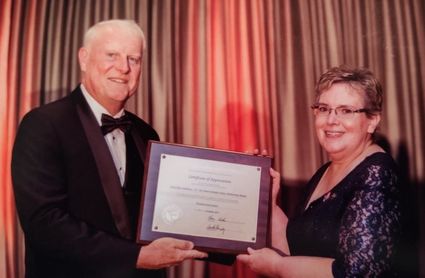 Plainfield Park District Commissioner Mary Kay Ludemann has been recognized by the Illinois Association of Park Districts for her 10 years of service.

Ms. Ludemann, who was first elected to the Plainfield Park District board of commissioners in 2009 and previously served as its president, was recognized at an awards banquet held in November.

She was elected in February to serve on the Illinois Association of Park Districts (IAPD) Board of Trustees, a 19-member body that advises the association in providing service, research, advocacy, public awareness and educational programs to park districts state-wide. She also serves on the IAPD's Program Committee and Illinois Park and Recreation Association Joint Editorial Committee.

During the same ceremony, the Plainfield Park District was also recognized with the IAPD's Best Green Practices award for the construction of the Prairie Activity & Recreation Center (PARC) which is the State of Illinois' first Net-Zero certified fitness and recreation center.

The Park District received a $1 million grant from the Illinois Clean Energy Community Foundation which helped offset construction costs for PARC which includes energy-efficient insulation and windows, creating an air-tight structure that is 65% more efficient than buildings of a similar size. PARC further offsets its energy usage with a 500-panel rooftop solar array capable of generating 213 kilowatts of electricity.