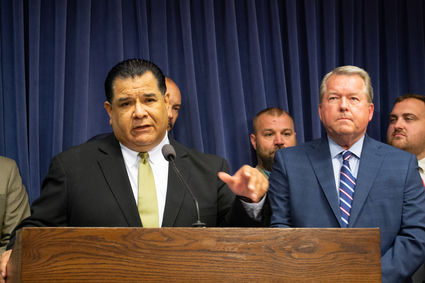 State Sen. Martin Sandoval, whose Statehouse office was raided by federal agents in September, announced late Wednesday that he will step down from his seat effective Jan. 1.

"Respect for my constituents and the Senate has convinced me that this action is necessary in order to proceed without distraction to the important work that needs to be accomplished throughout the state of Illinois in the future," Sandoval wrote in a letter addressed to the secretary of the Senate, Tim Anderson.

Federal agents executed a search warrant on Sandoval's Statehouse office and home Sept. 24. According to the search warrant for his Statehouse office, agents were searching for documents and materials related to several businesses, including a company that supplies red light cameras to municipalities in the Chicago suburbs, as well as people connected to those businesses and a number of local municipalities.

Sandoval has not been charged with any wrongdoing. He also was not present for any portion of the recently completed veto session.

The General Assembly is not scheduled to meet before Jan. 1, but by delaying the effective date of his resignation, under current state law he will be entitled to receive full pay for the months of December and January.

Sandoval is the second state lawmaker from Chicago to resign under a legal cloud this month. Rep. Luis Arroyo, a Chicago Democrat charged by federal officials with bribery, officially resigned from office Nov. 1 just hours before a special investigative committee was to begin considering whether he should be expelled from the General Assembly.

And federal embezzlement charges were filed Aug. 2 against Sen. Tom Cullerton, from Villa Park. He has pleaded not guilty, and remains in office. He is a distant cousin of Senate President John Cullerton.