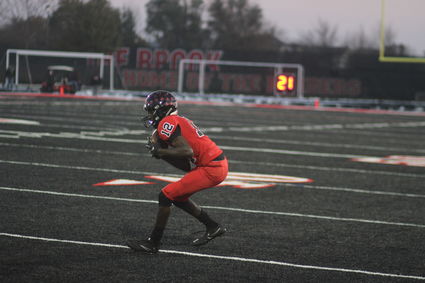 Like all teams this year, Bolingbrook had a hard time moving the ball against Warren's defense.

Bolingbrook did something that many teams have not done in the 2019 season against Warren - score a touchdown.

In the Raiders first quarterfinals appearance since the 2014 season, they lost 18-6, preventing them from playing Brother Rice in the semifinals.

"Anyone who was here understood that we struggled moving the ball the entire game," said Bolingbrook coach John Ivlow. "They physically beat us up."

The Raiders got off to an inauspicious start with a special teams miscue that resulted in a player hitting the ball on a Blue Devil punt that was recovered by Warren on the Raider seven-yard line.

The Raiders defense held still, as they did all game, and the Blue Devils were limited to a field goal.

A safety and a four-yard touchdown run by the Blue Devils put them in front at halftime with an 11-0 score.

In the second half, Warren extended its lead to 18-0 with a 62-yard fumble recovery for a touchdown.

The lone score for the Raiders came in the final minutes of the third quarter with a 12-yard touchdown pass from senior wide receiver Antonio King (5 catches, 29 yards) to senior tight end Trevor Borland.

The slight momentum swing for the Raiders in the second half was just not enough as the Blue Devil defense did what they have been doing all season, not giving an inch.

"They're really fast," King said. "They all listen to their coach, if there is an open hole then someone else slides in."

Although the Raiders had a successful season finishing up at 8-4, the goal is still to get back to the 8A state title game.

The last time the Raiders accomplished that feat, was in 2011 when they took home the title. 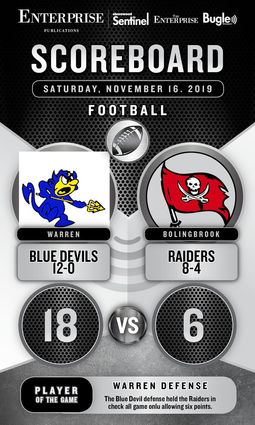 With the departure of guys such as King and senior quarterback Devyn Suggs who will be attending Yale, Ivlow said there will be big holes to fill for the 2020 season if the Raiders want to go where they feel like they can, state.

"We had a great senior group with great leadership this year," Ivlow said. "We've had some phenomenal kids from grade point average to personality and a lot of them are going on to college already to play football."

Defensively, the Raiders will be getting back junior cornerback Justin Walters who has offers from Notre Dame, Michigan, Northwestern, Army and Boston College.