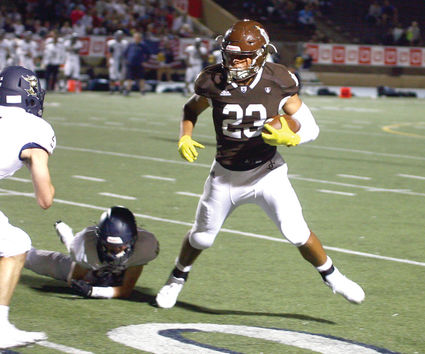 In its IHSA Class 5A quarterfinal match-up, with St. Louis' Metro-East Mascoutah Indians, the defending Class 5A State Champions from Joliet Catholic Academy (8-4), were deadlocked at 14-14 with 7:13 remaining, at Memorial Stadium in Joliet on Saturday night.

The visitors marched 70-yards on 15 plays behind their huge offensive line and scored the game-winning touchdown with 16 tics remaining on the scoreboard.

The Hilltoppers struck quickly in the first minute of the game.

Senior tailback Kenyetta Williams (18 carries, 134 yards, TD) electrified the huge Hilltopper contingent when he raced 66-yards to pay-dirt on the second play of the game.

Junior placekicker Jake Dixon's first of two PAT's, put the Hill up 7-0 with 11:04 remaining in the first quarter.

The fired-up Hilltopper defense, smothered the Indians and quickly picked up a three and out but could not move the ball.

Attempting to punt, the ball was muffed and the Indian defense blocked the kick and took over at the Hillltopper 21-yard line.

There was no scoring in the second quarter and the teams went to halftime still deadlocked.

With 8:41 remaining in the third quarter, Wills raced 85-yards for a touchdown and a 14-7 Indian lead.

The Hilltoppers answered with a 38-yard touchdown rumble from sophomore Jordan Anderson (14 carries, 136 yards, TD) to tie the game at 14-14.

The rest of the third quarter, the teams punted the ball back to each other and the score remained deadlocked at 14-14.

With nine minutes remaining the Hilltoppers faced a third and four at the Indians 44-yard line.

Running behind JCA's huge offensive line, Anderson had the Indians on their heels.

JCA sophomore quarterback, Aidan Voss ( 4-for-10, 33 yards, 2 INT) dropped back to pass and was sacked at midfield.

An incomplete pass on third downled to a punt that Middleton returned to the Indian 30-yard line with 7:13 remaining.

Six minutes and 57 seconds later, Wills' one-yard touchdown run moved the 9-3 Indians into the Class 5A Final Four against Rochester (11-1) in Mascoutah next Saturday.

For the Hilltoppers who had only six seniors on their roster, the 2019 season was a tremendous success. 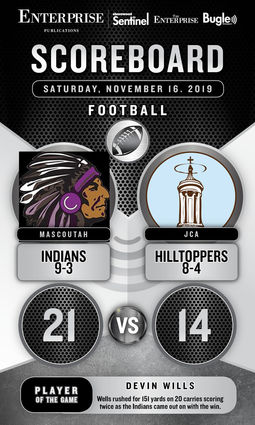 Being a year ahead of schedule, they advanced to the IHSA Class 5A Elite 8.

"I told the seniors, that I am so proud of what they went through and accomplished in their four years at JCA," Hilltopper coach Jake Jaworski said. "From suffering through losing freshman and sophomore team seasons to winning the Class 5A state championship as juniors and to making the Class 5A elite eight as seniors.

"To the many underclassman that we will have back in 2020, I told them they are now seniors and juniors and must look forward. They must also be ready to get back to work right now."