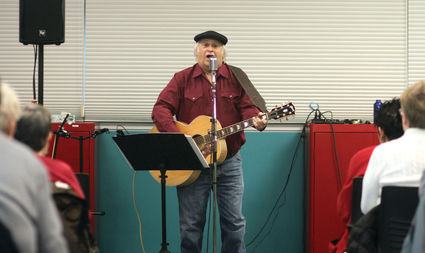 It's not every day where a supremely talented musician performs at a local venue.

The Woodridge Public Library had the privilege of Steve Justman, Chicago area singer, stop by for a rendition of famous singers.

Justman, who has performed on the WGN radio on Rick Kogan's Sunday Papers show as well as WDCB Public Radio's Folk Fest with Lilli Kuzma, has been primarily sang in the Midwest. What started off his "career" with singing at the age of two years old, Justman said he's loved music for as long as he can remember.

"I started off at a very young age and picked up a guitar at the age of 12," Justman said. "It's great to share a passion for something that you've been doing from such a young age."

In his performances in the Chicago area, Justman performs at many different types of venues such as concerts and programs at many public libraries, festivals, concert series and with many community and special events for audiences of all ages.

Justman showcases his collection of songs in his performances; singing and interpreting a mix of traditional and popular folk, pop standards, early rock and roll, rockabilly and classic country that people might know.

At the Woodridge Library, guests had the chance to listen to The Carter Family, Willie Nelson, Johnny Cash, Patsy Cline and more.

"There's a connection that music has from the fabric in America," Justman said. "The way that it can make someone feel is very special."

Out of the few famous musicians Justman emulated, Cash was a big hit to the audience.

Cash, who was a singer-songwriter, guitarist, actor and author, was someone who embraced country music, rock and roll, blues, folk and gospel.

Signature songs such as "I Walk the Line", "Ring of Fire" and "Get Rhythm" all sparked the interest of more than 50 people in attendance at the library, while Justman also provided history with Cash, among other musicians who paved the way for music today.

"I perform by myself but I also do perform with a Johnny Cash tribute band which is always a lot of fun," Justman said. "I play the bass and do a little with the historian part about Cash as well.

"I do that around the entire Midwest because of the popularity with him so I really enjoy that among performing some of the best music that America has ever seen."