Like their parties in Washington, Illinois congressional delegation split on impeachment 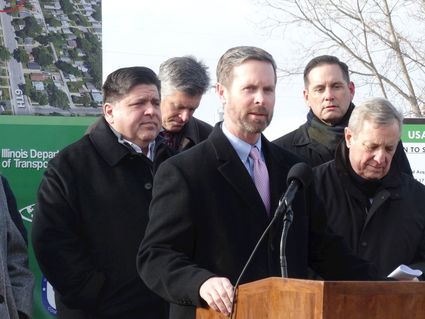 Democratic U.S. Sen. Dick Durbin of Illinois said Friday that he believes there was "strong evidence" presented in the House hearings this week to warrant the impeachment of President Donald Trump, but two of his Illinois Republican colleagues in the House strongly disagreed.

Durbin, along with U.S. Reps. Darin LaHood (R-18th) and Rodney Davis (R-13th) were in Springfield on Friday to take part in a groundbreaking ceremony with Gov. J.B. Pritzker for a local project being funded through the recently-passed $45 billion capital improvements package. They spoke with reporters afterward.

"I think there's strong evidence. It's compelling and sobering," Durbin said. "I think the witnesses have been very credible."

But Durbin would not say whether he thinks the House should pass articles of impeachment, nor would he comment about whether Trump's actions justified removal from office, which would be the consequence if he is convicted following a trial in the Senate.

"You're asking me to prejudge this case and I won't do that," he said in response to a reporter's question. "I'm waiting on the House of Representatives to decide whether to issue articles of impeachment and then to read them very carefully against the evidence that's been presented."

The Democrat-led inquiry was called to determine whether Trump abused the power of his office earlier this year by making the release of nearly $400 million in military aid to Ukraine contingent upon the president of that country, Volodymyr Zelensky, agreeing to launch investigations of Trump's potential 2020 president election rival, former Vice President Joe Biden.

On Wednesday, Gordon Sondland, the Trump-appointed U.S. ambassador to the European Union, testified that he and others pursued a "quid pro quo" – a Latin phrase meaning "this for that" – with Ukraine and that they were doing so under direct instruction from the president.

That was followed by testimony Thursday from career diplomats Fiona Hill and David Holmes, who both said there were back-channel negotiations happening that were counter to official U.S. policy on Ukraine and potentially damaging to U.S. national security interests.

When asked about his feelings on impeachment, LaHood said the decision on whether to remove Trump from office should be made by the voters, not Congress.

"You may not like Donald Trump, but less than 10 months from now you're going to be able to early-vote in Illinois and you're going to have lots of choices," LaHood said. "I think our Constitution would rather have the people deciding, and not 535 partisan members of Congress."

LaHood, incidentally, is the son of former Republican U.S. Rep. Ray LaHood of Illinois who, as speaker pro tempore of the House in 1998, presided over the contentious debate over whether to pass articles of impeachment over then-President Bill Clinton. Clinton was impeached for allegedly lying during a sworn deposition but was eventually acquitted in the Senate.

The elder LaHood, who later served as transportation secretary in the Obama administration, recently advised a House committee to avoid impeachment "like the plague" because it would likely result in all other legislative activity grinding to a halt

Rep. Davis, who was in the committee room when LaHood made that comment, said he now believes LaHood's prediction has come true.

"And I hate to say it. Ray was right," Davis said. "And it's indicative, especially yesterday (Thursday), when Speaker (Nancy) Pelosi (D-California), who came to Springfield to campaign against me in August, she promised my farmers that we would have a vote on their number-one issue, the (U.S.-Mexico-Canada trade agreement) in October. She is now saying it may pass in 2020."

The House Intelligence Committee concluded its impeachment inquiry Thursday. That panel is now expected to write a report and refer it to the House Judiciary Committee, which will decide whether to recommend articles of impeachment to the full House.