Activities begin downtown as early as 10 a.m., and include the Fantastic Fun Fair in the Joliet Area Historical Museum's auditorium 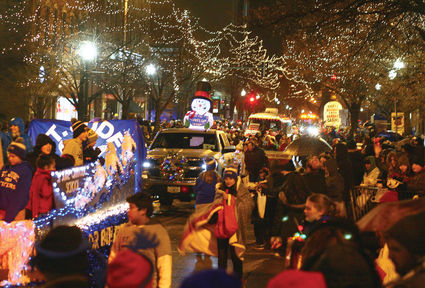 Christmas tree lighting begins at 5:15 p.m. in Van Buren Plaza followed by the Light Up The Holidays Parade at 5:30 p.m.

Light Up the Holidays Parade and Festival is held on the Friday following Thanksgiving each year.

Christmas tree lighting begins at 5:15 p.m. in Van Buren Plaza followed by the Light Up The Holidays Parade at 5:30 p.m.

Events of the day include:

Joliet Area Historical Museum Free Day kicks off the event when doors open at 10 a.m. The museum is located at 204 N. Ottawa St.

At 10 a.m. there is Joliet Junior College Ice Sculpting in front of the Museum as well as the arrival of Santa Claus.

At 11 a.m. the Joliet Central Jazz Ensemble performs in the auditorium. That is followed by a noon performance of the Bicentennial Park Gnomes and a JTHS Robotics Team demonstration at 1 p.m.

The Saint Joseph Academy Choir of Joliet and Kids Christmas Choir of Fine Tunes Center for the Arts of Channahon performs at 2 p.m. and the Joliet American Legion Band Small Ensemble performs at 3 p.m.

At noon and 2 p.m. there is special story time with Santa at the Joliet Public Library at 150 N. Ottawa St. Joliet Mayor Bob O'Dekirk will join Santa for the 2 p.m. story.