Play centers around remaining positive throughout lives up and down journey 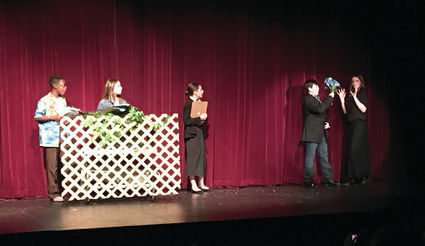 Usually, there are two sides to every story.

Such is the case in the play "Hydrangea Albright" performed by Brooks Middle.

"Because we have an old high school building, we're blessed with a full theatre set up," said director Ruth Bardy. "The lights, sound, spotlight and everything else is all ran by the kids."

Since taking over the old Bolingbrook High School building in 2004, Bardy has been in charge of the drama program at Brooks.

Bardy said the play, which is the Brooks' 30th production, correlates to life, which is why this is one of the more important plays that goes on at the middle school.

"The play is centered around that there are things that happen in our life good or bad," Bardy said. "There are dueling playwrights that cover this notion."

The juxtaposition that Bardy alludes to is a theatre that inadvertently hires two different playwrights to write a play about the main character of the play, Hydrangea Albright.

This girl, who's family is cursed with bad luck, has one playwright that sees her life as a disaster.

On the other hand, the other playwright sees her life as a comedy where failure leads to new opportunity.

"The comedy playwright tries to organize her playwright in a very positive way and then the tragic playwright who thinks everything is horrible and is trying her best to make it in a big grand tragedy."

During the play, both sides argue while eccentric characters perform and rewrite the play.

The play begins with a curse created by Albright's great-great-grandfather, and the curse continues throughout many generations of the family.

Events that occur such as a lightning strike to a tuba, to a case of uncontrollable hiccups, to a tree house that was destroyed by a piece of a International Space Station, the unfortunate events keep rolling on.

With the many unfortunate events that take place, the play illustrates that the proverbial glass half full or empty can be used in any situation depending on how someone reacts.

Albright illustrates not just hers, but everyone's moral compass on how to react to certain events in one's own life by remaining positive and not acting like the victim in every bad situation that is dealt to someone.

"We try to choose our plays with respect to all of our actors," Bardy said. "We try to select a play that has a message for them, and of course the moral and the message in this play is that life is going to throw things at you and the way you react is more important is more important than what actually happens to you."