Trojans fall to WWS in Class 7A second round 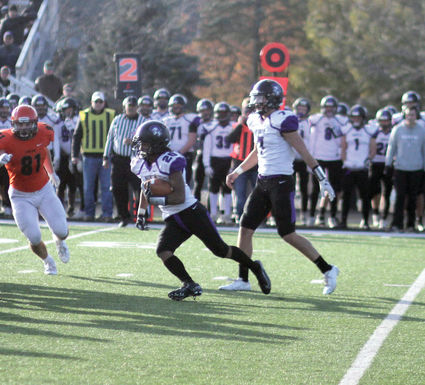 Downers Grove North fell to Wheaton Warrenville South in the second round of the IHSA Class 7A football playoffs.

The final 28-7 loss to Wheaton Warrenville South is not indicative of the way Downers Grove North performed in the Class 7A second-round playoff game.

"I don't really think the score showed the story of the game," said coach Joe Horeni. "We certainly had a lot of opportunities in the game to put some more points on the board, but they're a really well coached team, physical up front and I'm just sad for our seniors right now."

The Tigers jumped on the board early with a three-yard touchdown run by senior running back Jake Arthur to go ahead 7-0 with 7:58 remaining in the first quarter.

That is all the Trojan offense could muster up against the stingy Tiger defense however, as they went on to score once more in the first quarter and twice in the last 3:12 of the game to advance to the 7A quarterfinals.

"We play a lot of seniors and those guys have fought very hard for us all season long," Horeni said. "I'm just hurting for them right now, but we're excited about the success that we had and getting a win in the playoffs."

Although the Trojans were heartbroken following the loss, there were positives from the season.

The Trojans needed to win the last game of the season over cross-town rival Downers Grove South just to get into the postseason.

That home game, which ended in a 14-7 victory, propelled the Trojans into the playoffs where they defeated Maine West. 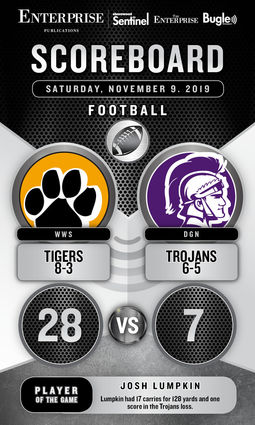 "Getting that win last week like we did and then playing very tough against a team who has won seven state championships is something to be proud of," Horeni said. "Our seniors have done a lot to lead by example and showed our young guys what to do, but as I said at the end of our meeting, this is our expectation and our younger guys know that we expect to make it to the playoffs and win games."

Next year, the Trojans will be without Lumpkin and senior quarterback Drew Cassens (19 carries, 80 yards), but Cassens said he expects great things in the future to come from Downers Grove North football.

"I'm really going to miss the relationships with the players and coaches here and building that brothership and family," Cassens said. "The lower levels are getting right after it though too, there are some athletes we will have and I know we will be solid next year."