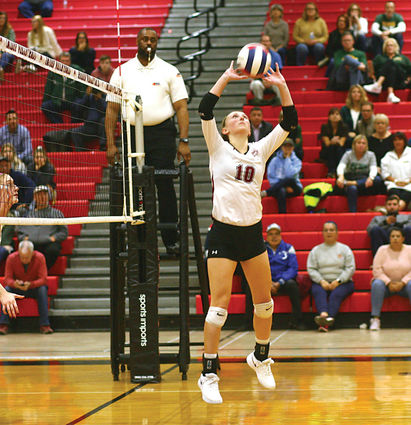 The Plainfield North volleyball team had a goal this season – and that goal was met.

With a 22-25, 25-23, 29-27 win over Naperville North on Halloween night, the Tigers won the Oswego Regional championship and met their goal set at the beginning of the season.

"We had a tremendous season overall," said Plainfield North coach Matthew Slechta, "Our goal was to win regionals and see what happened, so everything after that was icing on the cake."

The regional championship was the fourth in school history and first since 2014.

"We have worked so hard this whole season and I am happy with winning regional," said North's 6-foot, 3-inch sophomore Ella Wrobel. "This is obviously not the ending we wanted, but we had such a good season."

Gawron is one of eight seniors that make up a special group to Slechta.

"The way we battled back is a good way to go out," he said. "This is a great group of seniors we have and we are going to miss them, but it was a great run. I started here when they were sophomores, so to see them build up now through senior year has been great and they left a great legacy for the underclassmen."

Gawron said she is happy with the way her class went out.

"Our goal was to leave a legacy and that is exactly what we did. We have never had as big of a crowd as we did tonight. This is the best senior class that I have seen here, we connected so well on the court and I am very proud to be part of that," she said. "We left our mark. Everyone has gotten better at every level of the program. We know everyone can step up and get it done."

Wrobel knows the underclassmen will be the ones to look to continue to take the program to the next level – and she said they had good role models.

"The seniors set a really good bar for us as far as how to lead the team and that is why we had such a successful season," she said.