Despite loss to the state's top-ranked team, Notre Dame has one of school's best seasons 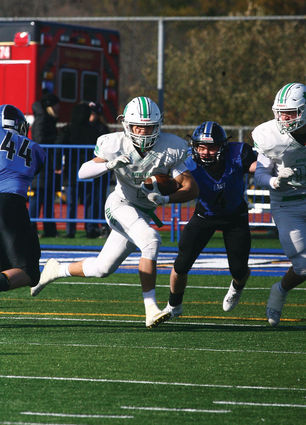 Notre Dame outscored Lincoln-Way East 13-0 in the second half of the 23-13 loss to the Griffins.

If only the game were a little bit longer.

Notre Dame found its offensive rhythm in the second half of the second round matchup at Lincoln-Way East, but needed more time as the clock ran out on the game and the season with a 23-13 loss to the No. 1 ranked team in Illinois.

"They counted us out from the beginning and I think we held our own against the No. 1 team in the state," said junior quarterback Anthony Sayles. "I give them credit, but we held our own."

The Dons found themselves down 23-0 at half, thanks in part to three Lincoln-Way East scores in the final 1 minute, 40 seconds of the first quarter.

The Griffins got on the board first with 1:40 remaining when they followed a bad snap on a put, giving East good field position and a chance for University of Michigan signee AJ Henning to score the first of three scores on the game – this from one yard out.

Roughly 35 seconds later – on another three-and-out, ND had a bad snap on a punt go through the back of the end zone for a safety.

On the possession following the safety, Henning scored for the second time on a 25-yard reception.

He added his third score, the final tally for Lincoln-Way East with 19 seconds to play in the first half, following a rare Julian Schurr fumble in the shadows of the Don goal line.

"We didn't get going in the first quarter. There was the wind factor and a few miscues and you can't play a game like that against a good team," said Notre Dame coach Mike Hennessey. "I am very proud of how we played the whole game. Our kids never gave up, never quit – it was a testament to everything we have done since January. We were battle tested and we felt that we were ready against them. Our defense held strong throughout. We needed to give them a sense of doubt earlier in the game."

In the second half, Notre Dame got things going offensively when Schurr ran up the middle from one-yard out to put the Dons on the board.

In the closing minutes of the game, Sayles found Nick Giamarusti for the other Notre Dame touchdown. A failed two-point conversion resulted in the final 23-13 score. 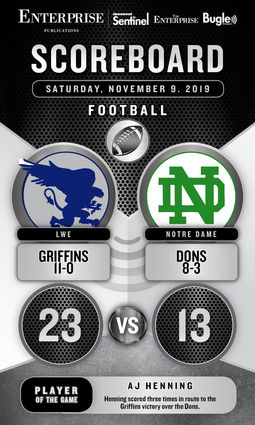 "It was 23-0 (at halftime), but we knew we had to keep fighting. We had some momentum towards the end, unfortunately, the clock wasn't on our side," Sayles said. "We used our love as motivation. We are a family here, we are all brothers and we couldn't go out without a fight. This was a great season, I love all my seniors, but the juniors will just use this as motivation and keep this in the back of our minds."

Hennessey said he was proud of the way the senior class meshed to lead one of the better Notre Dame teams in recent history – a team that started off 7-0 before losing a pair of close games when Schurr was sidelined with a shoulder injury.

"This is a group that had a lot of guys playing for the first time. In January, we look at those guys and wonder if they will be able to step up and play as hard as we need. It takes a lot of work, a lot of conditioning and strength training and team building and obviously, they were ready," Hennessey said. "It is a credit to them. We had seniors that played well for two years and they all mixed well together."