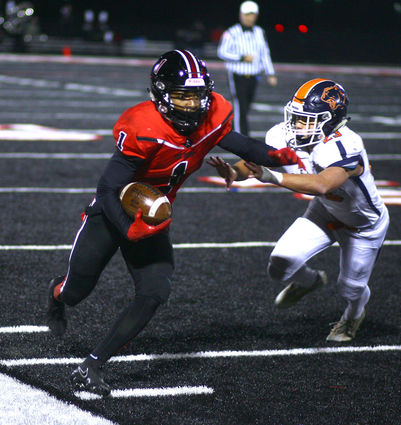 Antonio King and the Raiders defeated Oswego in double overtime to advance to the Class 8A quarterfinals.

The last time Bolingbrook was in the IHSA Class 8A quarterfinals was 2014 after defeating Oswego 31-28 in overtime to get past the second round.

Saturday night, the Raiders advanced again with another win over Oswego – only this time it took two overtime periods and the Raiders won 31-30.

The teams traded first-play touchdowns in the first extra period and after Antonio King scored the go ahead touchdown to open the second OT, Oswego answered, but instead of sending the game to a third extra frame, the Panthers went for the two-point conversion and the win.

The ball went to defensive end Jack Hugunin, who doubles as a fullback around the goal line.

"We knew who was getting the ball - that was no secret," said Bolingbrook coach John Ivlow.

"We knew we had to hit the big guy," McLaurin said. "We knew the ball was either going to go to him or he was going to lead the quarterback to the end zone. We put our big lineman John Williams out there in the A-gap and that made him slide inside. When he did that, we had that one inch we needed to make the tackle."

Alex Tran opened the scoring for the Raiders when he broke free from 55-yards out with 8 minutes, 19 seconds left to play in the opening quarter to give Bolingbrook the 7-0 lead.

There was no score again until Joseph Balas hit a 35-yard field goal to extend the Bolingbrook lead to 10-0 with 3:47 left in the third quarter.

Oswego got on the board in the closing minute of the third quarter on a Hugunin run to cut the lead 10-7.

The Panthers took the 14-10 lead with 6:29 left in the fourth quarter, then five minutes later King scored his first touchdown of the game out of the wildcat formation from 17-yards away.

Oswego moved the ball in the final seconds and sent the game into overtime with a 28-yard field goal. 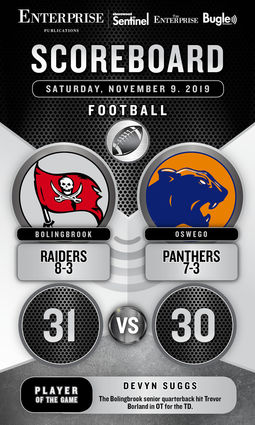 In the first OT, quarterback Devyn Suggs hit tight end Trevor Borland in the back of the end zone.

"This took heart," King said. "Nobody ever gave up and I am really happy with my team. I hate the cold, but I love (that we get to practice another week)."

That game will be at Bolingbrook as the No. 21 seed Raiders host No. 4 Warren.

"It has been since 2014 the last time we were in the quarterfinals. We went through some things that people don't realize – we've been through eight offensive coordinators, seven defensive coordinators in the last six years," Ivlow said. "We have been through some changes and now we are starting to get some stability and you see it. Hopefully, we are back on the rise."