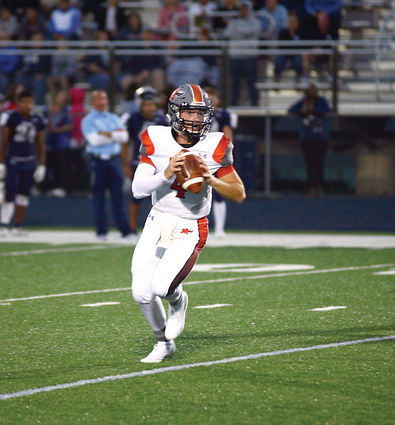 After watching Edwardsville (8-3) score the last 10 points of the first half, the host Minooka went to its halftime locker room trailing the Tigers 17-14.

That was all the scoring Edwardsville got in Saturday's 34-17 loss to the Indians in the Class 8A second-round playoff tilt.

When a football team has not one but three Illinois High School Football Coaches Association's Hall of Fame coaches half-time adjustments that lead to victory have been a norm for the Indians.

John Belskis, along with associate coaches Terry McCombs and Bob Williams were men of few words at halftime. Toss in a few words from Indian defensive coordinator Matt Harding and the Indians did respond.

An Indian second-half avalanche buried Edwardsville outscoring the Tigers 20-0 in the second half.

With the win, the Indians improve to 11-0 and move on to a Class 8A Elite 8 quarterfinal game at Brother Rice (7-4) next Saturday in the Mount Greenwood section of Chicago.

After getting a three and out on Edwardsville to start the third quarter, Minooka marched 59 yards on nine plays - capped off by a 2-yard touchdown run, by senior quarterback Seth Lehr (14 carries, 35 yards, TD). Minooka place-kicker junior Mason Spivey's PAT was blocked for a 20-17 Indian lead with 5:34 in the third quarter.

After Indian kickoff specialist Trent Hudak launched his third consecutive kickoff out of the end zone, the play of the game was next.

Hampton fired a pass over the middle and Indian strong safety Ernesto Ramirez jumped the route for his seventh interception of the season at the Tiger 26 and returned it to the Tiger 11.

"My defensive line put a lot of pressure on Hampton." Ramirez said. "I was able to jump the route for the huge interception."

On a third and goal, Belskis went to his bag of trick, calling for a tight end screen.

Lehr rolled to his right and then found Mike Zito wide open, on the other side of the field and the 6-foot-2, 215 pound Zito, waltzed into the end zone. Spivey's kick made it 27-17 Indians. with 3:23 in the third quarter.

With 4:40 left in the game, Ellens scored his second touchdown of the game from four yards out to put the Indians up 34-17.

The Indians four minute offense actually controlled the ball for six minutes, culminating with the Ellens (23 carries,121 yards, two TD) score. In the game, Ellens passed the 1,000-yard rushing mark and score his 20th touchdown of the season.

"Everything starts for me up front, with my outstanding offensive line, "Ellens said. "They block for me and I just run behind them. On the 24-yard touchdown run, I received great blocks on the outside that led me to the TD"

Ramirez picked off his eighth interception of the season with 2:24 left and Lehr and the Indians went into the victory formation and ran out the clock. Ramirez's eighth pick of the season tied the Minooka school record for interceptions.

The Indians took the opening kickoff and marched 80 yards on 14 plays and scored, as junior fullback Zach Wingerter carried the Tiger defense into the end zone from one yard out. After Spivey's first of three PATs, the Indians led 7-0 with 7:14 in the third quarter. Edwardsville scored on a 12-yard touchdown pass from junior quarterback Ryan Hampton (9-for-16, 139 yards, two TD, 2 INT) to senior Justin Johnson (two catches, 35 yards, two TD) to pull the Tigers even at 7-7.

The Indians answered with a 10-play, 80 yard drive capped off by a 24-yard scoring jaunt from Ellens for a 14-7 lead with 1:21 remaining in the first quarter. Edwardsville closed out the half with a 25-yard field goal and a 23-yard scoring pass from Hampton from to Justin Johnson.

"We told the kids at halftime that we shot ourselves in the foot in the first half that led to Edwardsville's 17 points," Belskis said. "We challenged the kids and they responded. We had a great game plan on offense and we ran it to perfection. Our defense was outstanding shutting out Edwardsville in the second half and shutting down Justin Johnson.

"Seth (Lehr) is the man. He runs the show for us and we want to keep this train rolling. We hope to stay healthy have a great week of practice and get ready for Brother Rice."

Lehr completed 12 of his 13 passes for 116 yards and a touchdown, including going six-for-six in the second half.

"We just came out of the halftime firing," Lehr said. "My defense totally shut down Johnson. I can't say enough about my defense. Every week my O line does it. They're the best in the state. All of my success tonight throwing the football goes to teammates. My receivers, the O line and Noah blocking for me.

Justin Johnson entered the game with 1,137 yards and 20 touchdowns. Harding's defense held the D-1 Edwardsville back to just 56 yards on 16 carries - 35 of Johnson's rushing yards came on one carry.

"(It was a) tremendous effort by our entire defense," Harding said. "All of our defensive coaches work together to help our defense. We had problems containing their quarterback in the first half. Our second-half adjustments relayed into what we expect in the second half - zero points for our opponent. Ernesto was outstanding for us tied the school record for interceptions and has been a great leader for us."