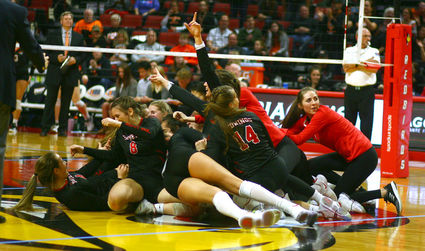 Last season, as Benet Academy placed third in the state in Class 4A, then-junior Colleen McGuire was not on the floor at Redbird Arena.

After playing on the lower levels her first two seasons at Benet, McGuire decided not to play last season in order to focus on training for her future in beach volleyball, which she will play next season at the University of California-Davis.

This year, she decided to return to the Redwings and the move paid off for both her and the team.

McGuire was an impact player for Benet Academy all season, and recorded two of the most important kills in school history.

"This is my last point of indoor ever for me and to have that is an unbelievable opportunity that was given to me and I am happy I had it," she said. "(After I hit it) I was waiting for the dogpile and it feels really, really good to be part of that."

"The feeling is indescribable. To have all the hard work pay off and the fact that I can do this for my teammates. When I graduate, I will remember this moment and hopefully leave a legacy for Benet volleyball. You can't really top this," Gregus said. "Our bond is so strong and we trust each other so much."

It was the fourth state championship in program history and tied the Benet standard with a 41-1 record on the season.

"They really turned it on. I didn't think we had another level and then since sectional started, only one team even got to 20. You talk about a level of focus - they were in it," said Benet coach Brad Baker. "It is hard. You have to stay healthy and you have to have the talent, then you have to have all the positions and they you have to actually like each other and want to get along for a season and play for each other. We don't take it for granted, this team is really special.

"We are not scheduling cupcakes – when you get 40 wins at this school, you earned it."

In fact, three of Benet's conference opponents also earned medals at state as Marist placed third in Class 4A and Joliet Catholic Academy was second in 3A.

The championship was the third Benet title in a week, as the boys soccer team and girls cross country team also earned state titles. 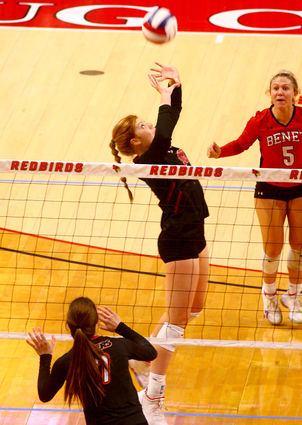 "I have a lot of friends that just won state championships in soccer or cross country and they told me it was our turn and we have pride in the school," Gregus said.

That pride in the school was what drove senior Hattie Monson.

The University of Notre Dame-bound libero has won championships all over the world, but her resume was still lacking one for her school.

"This is the best feeling ever. This is a whole different feeling because I am doing it for my school and my community and that is awesome to have all these fans that I am really close to all of them – they are my best friends," she said. "All of us have worked so hard to get to this point right here and I can't wait to see the future of Benet because I think they will take it as far as we did and win it again