Benet heads to state, rematch with Marist up first 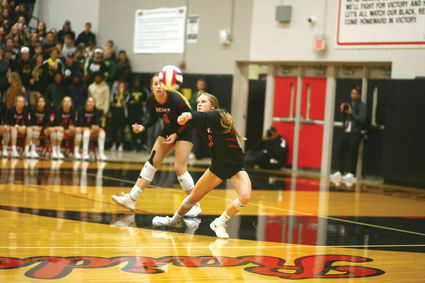 Benet Academy will take on Marist in the state semifinal Friday night.

For the second-straight season, the IHSA girls Class 4A state volleyball finals will feature a match between a pair of nationally ranked teams.

And, for the second-straight season that match will feature Benet Academy and will take place in the semifinal match.

Conference opponents Benet and Marist will be the feature match of the opening night and will allow only one team in the USA Today Volleyball top 15 rankings to compete for a state championship.

The teams split this season with Marist winning the East Suburban Catholic Conference tilt, while Benet win at the Wheaton Classic.

"Marist is another great opportunity for us," said Benet coach Brad Baker. "We know how difficult the challenge will be and we are excited for the challenge, but our goal is to win the state championship. Who we play and when is not a factor. We have to win seven matches. Friday is one of the seven. We expect Marist to play really well and we need to prepare ourselves to do the same."

In the last 13 seasons under Baker, Benet has competed in the state finals six times, winning the state title three times. A season ago, Benet placed third in Class 4A in a year where for the first time in program history the Redwings advanced to the state finals and did not compete in the title match.

The return trip to Illinois State University is the first time Benet will earn a trophy in back-to-back seasons since it did so four years straight from 2011-2014.

"I am very happy and proud of the girls," Baker said. "A lot of what happens this time of year is based off how hard they work in the offseason. We have a very hard working group who has put in countless hours to make this happen."

Baker will have an interest in the other side of the bracket and not just from a scouting perspective, as his daughter, Rian, is a sophomore setter for Fremd. The Vikings will face Wheaton Warrenville South in the first Class 4A semifinal.

"My daughter has been to more state finals weekends than any player or coach that will be there this weekend beside the Benet coaches," Benet said. "The first time she was there was when she was five years old - she basically grew up in the Benet gym watching so many players and teams get to make this trip.

"It is an amazing experience and I very happy she gets to do it with her team. But, if we play Fremd, I am pretty sure she won't take it easy on me."