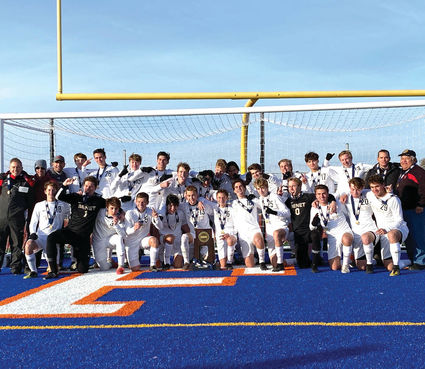 As if winning the IHSA Class 2A soccer championship wasn't enough, the way Benet Academy won was unprecedented.

In the 11 years of the three-class system, no Class 2A champion has ever blanked every opponent from the regional opener through a championship.

"It is almost overwhelming to think about," said Benet coach Sean Wesley. "Once we started getting the results and getting the shutouts, it stopped being just about, 'can we win?' it was about, we are not going to let anyone score against us. It made my job easier when everyone was willing to defend with equal intensity that they are willing to attack with. They wanted the clean sheets.

In the state championship match this season, Benet got nine saves from Vyto Staniskis, who tallied 38 total saves in the playoffs.

The Redwing (21-1-2) goals in the state final match came from Sam Hepburn at 24:05 on an assist from TJ McVey and Hans Haenicke at 8:49, assisted by Nick Augustyne.

Four teams have posted 22 shutouts in a season and Granite City holds the state record with 23 in 1982.

"The biggest thing is the grit of this group," Wesley said. "Grit is kind of a dirty word now in 2019, everyone says kids today just don't have it and we had 25 kids that just showed it every day

Keeping clean sheets throughout the playoffs is unbelievable and that only happens with that grit and work ethic and togetherness and chemistry and all those things you need to play great team defense."

Wesley said that grit starts with a pair of junior defenders.

"Anthony Klos and Zach Serafin was an unbelievable pairing of two centerbacks," he said. "Anthony was playing triple-A hockey and now plays for the Benet hockey team and having that mentality and someone who takes it so personal when he plays. He man marked almost every great forward we played this year. Having one of his best friends back there with him - it was a mutual combination.

"Then Vyto was unbelievable and he came up big when he had to - he just didn't need to a lot. He did save us in the Peoria Notre Dame, but there were other games that our defense played so well that he didn't need to be called on."

This is the second consecutive season that has concluded with a Benet Academy team atop the IHSA soccer podium, as the girls won the title last spring.

That only added to the boys motivation.

"Seeing the girls team have the success they had and how the school rallied behind them made us hungrier," Wesley said. "The one thing I tell parents before they send their kids to Benet is that the peer pressure in the classroom is an unbelievably positive thing that makes those kids perform and you can see it with the grades and average ACT we have. Well, that same peer pressure carries over to the field. Our attitude and effort that you see is the result of 25 guys pushing each other."

The Redwings have been flirting with a soccer championship for a while and should be in a position to challenge for a while.

"This is so many years in the making. We have had a lot of deep runs and have knocked on the door, this year we were able to kick the door down," Wesley said. "All of our attacking players and their subs were all juniors or younger.

"We think we are in the position for the next three, four or five years to be competing at the highest level. The junior class that will be back as seniors, six of them played varsity soccer as freshmen."