Benet beats Marist in two sets, heads to 4A finals 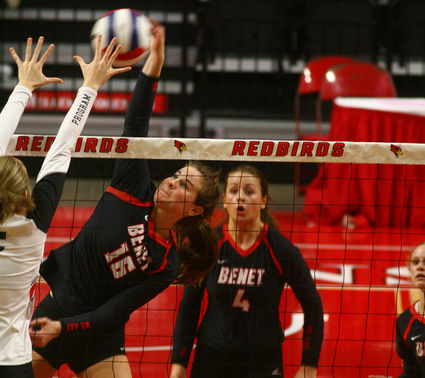 NORMAL - Coming into the IHSA Class 4A state volleyball semifinals, Benet Academy had only one loss on its resume, a 25-13, 25-21 loss at Marist in the final regular season match of the season.

That same Marist program had defeated the Redwings in the 2018 semifinals and went on to win its second-straight title.

To say Benet was focused was an understatement.

That focus showed as the Redwings used a dominant first set and a come-from-behind second to defeat the RedHawks 25-13, 25-23 and advance to the IHSA state finals against Wheaton Warrenville South who defeated Fremd in the other semifinal.

"These girls prepared for this moment, the results were just a reflection of that," Benet coach Brad Baker said after the semifinal win. "We have been going over this match over and over again and we have had some real strict practices on what we need to do to win this match. It is one thing to prepare and know and it is another thing to do.

"They beat us up down there and we took a whooping. We talked about being a winner or a loser – losers are going to hide from it and winners are going to come back and put the work in. It is hard in situations when you adults, but we are asking kids after they take a whooping to look them in the face not that long ago. That is a great skill – not just in volleyball, but in life."

Benet did split with Marist during the regular season, as the Redwings earned a three-set win in the Wheaton Warrenville South tournament earlier in the season, but that did not even the score for the Benet players that were part of the only Benet team to advance to the state finals and not play in a championship match.

"Last year, working all year to get to state and losing, it has been with us since the beginning of the season," said senior Sophie Gregus. "The seniors wanted to make a new legacy and we have been saying all year that that is our year. Having that in the back of our minds the whole year has motivated us to work harder every single day." 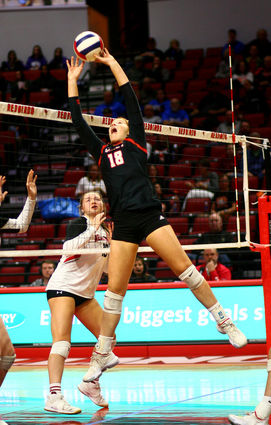 "Ever since the schedule came out and we saw that we could play Marist again in the semifinals, it was one game at a time, but this was always in the back of our head and this is where we wanted to be," Kenny said. "It put a fire in us."

Rachel Muisenga paced the Redwings with 22 assists, as well as six blocks (one solo).

"Coming in as underdogs after losing in that match, it made us focused and we were ready for it," she said.

The state championship match will also be a rematch for Benet, as it defeated Wheaton Warrenville South 25-9, 20-25, 25-13 earlier in the season.

Baker said the Redwings will not take the Tigers lightly.

"Wheaton Warrenville does not care what happened tonight and they are going to be ready to play," he said. "We don't want to be the best team on Friday night, we have to go out and earn it tomorrow."