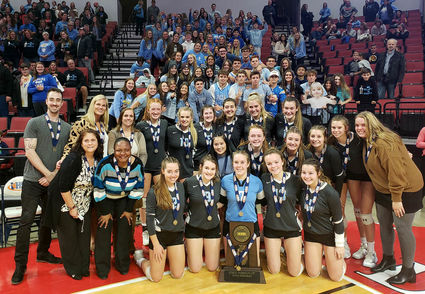 That is at the heart of all Joliet Catholic Academy athletics and the girls volleyball team is one of those top programs.

This season, the Angels battled injuries as well as a schedule that featured a conference that has a pair of nationally-ranked teams that played in the final four in Class 4A.

JCA overcame all of that to place second in Class 3A at Redbird Arena on the campus of Illinois State University in Normal.

The Angels fell 25-16, 25-19 to defending champion Sterling, the same team that beat JCA in the state semifinals a season ago.

"I give these girls a lot of credit to continue on a great tradition of JCA volleyball. What they came through this year with all the injuries, it is such an honor to even make it here and to be here in the championship game is even more of an honor," JCA coach Christine Scheibe said. "It was obvious that Sterling has that cohesiveness that they have been playing together for a long time. For the way we have had to play this season with all of the injuries, we were not there all of the time."

The trophy was the 12th state trophy in the history of the program.

While the ultimate goal for the Angels was to win the state title, placing higher than last year was a goal they accomplished.

"I think this playoff run was a great show of our character because we all gelled together and did what we needed to do," said senior Bella Ray, a Lewis University commit. "We all love each other. I said yesterday that we wanted revenge on what we did last year and we got that because we got second this year and we were third last year.

"The injuries complicated things because I think that if we had a full roster out there all year, we would have had two losses all year."

One injury reprieve JCA got was getting 6-foot junior outside hitter Jillian Gray back for the playoffs.

Gray led the Angels in kills in both matches at state, posting nine in the state final and seven in the semifinal.

"It was a really nice feeling because this year has been a physical roller coaster and to be able to finish out on the court and one more chance to give it my all when I wasn't sure if that was going to be a possibility was a special feeling," Gray said. "I had the adrenaline pumping and my ankle wasn't bothering me and I knew I had to push through for my team." 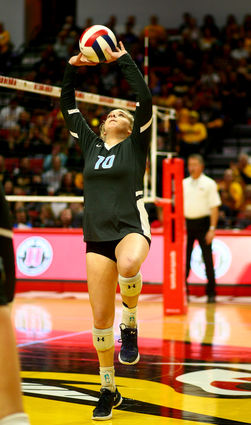 Another silver lining of the injury bug was the emergence of sophomore outside hitter Riley Hungate.

While the Angels have shown they can grit through difficulty and win a state trophy, Scheibe is looking for a season where they can develop the same cohesion as the teams that defeated them.

"We have talked to the girls about that. The state championship isn't really won this weekend. One of these years we have to have a good, solid record all year long and we can't rely on doing things the way we have been," she said. "This is the year that we thought we could put it together for the whole season and the injuries just took their toll. We know that this is not the way it's done and if you look at the last few state champions, they don't have records like ours."