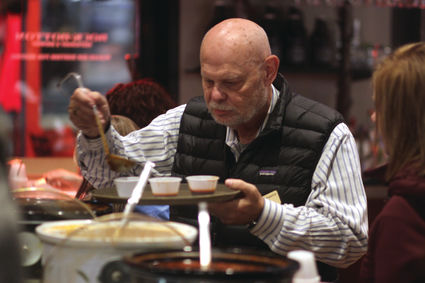 Last weekend, several local politicians were featured at Rock Bottom Restaurant in Bolingbrook for a chili cook off hosted by the bipartisan group Bolingbrook United.

Although the April election has long passed, officials elected are still competing against each other.

Last weekend, several local politicians were featured at Rock Bottom Restaurant in Bolingbrook for a chili cook off hosted by the bipartisan group Bolingbrook United.

"Tonight we have Bolingbrook United here and they're doing the fundraiser for their event which is the chili cook off," said manager Simon Sulaica. "The money raised will be used to help for their campaigns."

This fundraiser that raised more than $3,000 last Thursday night, hosted elected officials such as the state senator, village board members and local school board members. To participate, there was a $10 buy in where whoever paid, not only had the chance to taste all of the chili, but also help pick the winner by voting.

The winner of the chili cook off went to State Senator Jennifer Bertino-Tarrant, who took home the award, "the golden spoon".

A few of the other elected officials that were there engaging with families and residents of Bolingbrook were Jason Cann, Debi Savage and Jackie Traynere.

Cann, who works as a Plainfield Library Trustee, is a community activist who seeks to increase transparency in government on behalf of the taxpayers.

"I think it's very important for people to support the Bolingbrook United Group," Cann said. "It's important people have a different voice, for far too long people just had one vision and one voice."

Savage, is an elected Will County Regional School Board Trustee, that wants to bring her talents and ideas to the Valley View School District Board to make a more direct and impactful difference in the education and lives of Valley View students, parents and faculty.

"We want to make a change in Bolingbrook," Savage said. "We want things to be fiscally sound, we might need some help with that, but we feel like we have some really good ideas and really good people with great integrity."

Traynere, is someone who recently ran for the Mayor of Bolingbrook and has been a member of the county board since 2008. 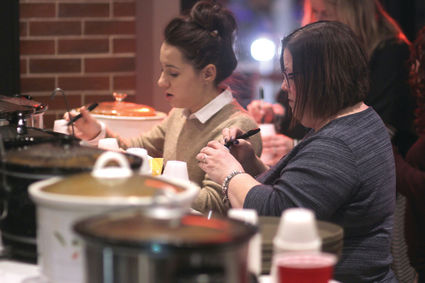 Different recipes for chili get featured at Bolingbrook restaurant.

"Three years ago I won re-election to the County Board and I got together with some neighbors who were upset with how things were going in Bolingbrook," Traynere said. "We decided it was time to ban together and figure out something we could do about it so we found some candidates and we ran them under the banner for Bolingbrook United."

Sulaica said although this event was meant for publicity for elected officials' campaigns, it was good to see those in office and future candidates from both parties getting along and coming together for a enjoyable fundraising event.

"This is good for us at Rock Bottom because we're helping Bolingbrook and their campaign by teaming up with the community," Sulaica said. "It's also nice to see even though it is a political event, for so many people to show up and all seem to be enjoying themselves while trying and enjoying some chili."