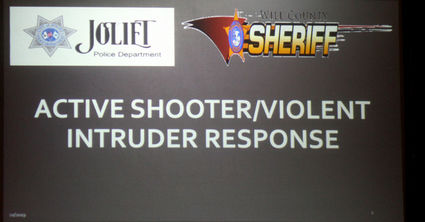 From 2000-18 there were 277 incidents in the United States involving what the FBI considers active shooters, which is 'one or more individuals actively engaged in killing or attempting to kill people in a populated area.'

In that time frame three were in Illinois – the Valentine's Day shooting at Northern Illinois University in 2008, an open-space shooting on North Milwaukee Ave. in Chicago in 2015 and the killing of three people one year ago at the Mercy Hospital and Medical Center in Chicago.

February of 2019 saw tragedy get closer to home when a lone gunman killed five and wounded police officers at the Henry Pratt Company's manufacturing and warehouse building in Aurora.

With the numbers continuing to increase every year, The Rialto Square Theatre partnered with the Joliet Police and Will County Sheriff's Departments to present an active shooter readiness seminar".

"It's a very tough topic to talk about, think about and let alone have a presentation about," said Sergeant Steven Formenti. "Unfortunately, we live in a world now where when we go home to watch television this is almost going to be on every time."

The U.S. Department of Homeland Security recommends creating a plan of acting in your professional and personal life, and those who presented agree with that notion as well.

"When 9/11 happened and Columbine happened everyone was glued to their television for hours and hours," Formenti said. "Now, you come home and you have all of these shootings happen and we're so immune to it it's almost like it's expected."

With some studies that have been done that have indicated that mass shootings have tripled since 2011, there is never a better time according to Formenti to get educated on how to be as safe as possible.

Sixteen of the 20 most deadly mass shootings in modern history occurred in the last 20 years, eight of them in the last five years, which is why Formenti and Lieutenant Joe Rosado said there needs to be a plan incase of an emergency.

"The big part about this presentation is to recognize something before it happens and start looking at things a little bit different," Formenti said. "Get your eyes off of your cell phone and pay attention to your surroundings."

Clips of videos such as the 2017 mass shooting in Las Vegas, the infamous Columbine shooting and the Jacksonville airport shooting were all shown to the crowd at the Rialto to drive home the point that it can happen anywhere.

A Fight-Flight-Freeze term was used to help describe those who are not anticipating a catastrophe - that is a response the body's automatic, built-in system designed to protect us from threat or danger. 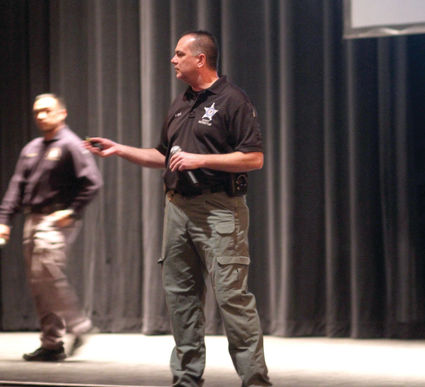 Officers speak on what to do in case of an emergency situation.

"All of that time spent in that freeze moment is more time for something terrible to happen to the person,"Formenti said. "If someone has a plan, recognizes where the exit signs are, thinks about how they can react and where a shelter place can be among other things is the proper way to ensure more safety."

Because it's becoming more of a frequent event, Rosado said that not only is there an active shooter program at the department, but they're getting the information out to schools now as well.

"Some schools do lock-downs or other programs which we will support," Rosado said. "As long as they have a good plan and we have a good line of communication with them, we're happy about that and to obviously come out and help those in anyway possible."