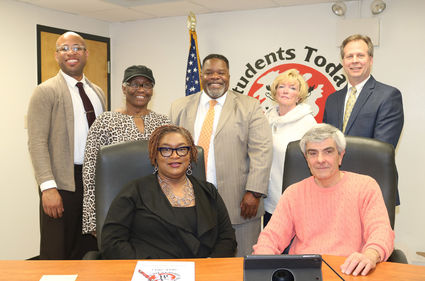 2019. The day was an opportunity to honor those citizens across the state of Illinois who

volunteer their time and energy for the successful education of children.

The Joliet Public Schools District 86 Board of School Inspectors include (front row, from left to

"Our school board members volunteer countless hours to support our students and staff," said

commitment, and dedication to District 86."

Jeffrey Pritz has served on the Board of School Inspectors for 26 years. Deborah Ziech has been

on the board since 2003. Tonya Roberts and Gwendolyn Ulmer have both served for 8 years.

Anthony Contos has been on the board since 2013. Erick Deshaun Dorris has been a school board

member since 2017 and R. Emil Standfield was elected earlier this year. Currently 10,904

District 86 schools in the city of Joliet. District 86 is the fourth largest elementary school district

in Illinois and the fourth largest employer in Joliet.