Boudouris awarded board seat after recount 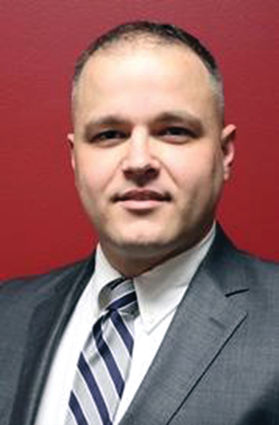 On his final meeting as a member of the Valley View School District, James 'JT' Boudouris said the service of the Boudouris family had come to an end after his parents had spent more that 70 combined years working in the district.

After a recount of votes, that service has returned.

The Will County Clerk's Office on Tuesday amended the results in the school board race for the Valley View School District in the April 2, 2019 Consolidated Election by order of the 12th Judicial Circuit Court, making Boudouris the third-highest vote getter and Sandra E. Carlson the fourth-highest vote getter.

Judge Roger Rickmon discarded eight votes for Carlson in court on Tuesday because Election Judges at either a polling place or an early voting location did not initial blank ballots before they were issued to the voter. The judge's ruling gave Boudouris 3,291 votes and Carlson 3,286 votes, a five-vote victory for Boudouris.

The election results previously had been certified with Carlson having a three-vote victory over Boudouris.

Boudouris challenged the outcome of this narrow election in court.

"I am super excited about the outcome," Boudouris said. "I gave a speech my last board meeting and the purpose was calling out people who have bad things to say and who spread false things about the School District and about people I know personally. That kind of divisive behavior isn't helping. They are sewing seeds of discourse and you have no facts to speak of. They were saying bad things about other board members and spreading things about (Valley View Superintendent Dr.) Jim Mitchem and spreading rumors about the quality of the schools.

"They took that as me whining about losing."

Boudouris said when he originally challenged the votes, he was looking for abnormalities on the ballots - something most candidates do when losing a close race. He never expected to find what he did.

"On election night, I was up by 10 votes," Boudouris said. "On the day the county counted the mail-in ballots, I lost by three votes - and that was what I did - I lost. A county employee approached me with a discovery recount and for $10 per precinct, I can count up to 25 percent of the precincts. That was a no-brainer. It was curiosity. I saw ballots with no judge initials - then the focus went from a long shot to there is something here.

"No one can say the ballots were cast honestly and truthfully. We never came out and said there was fraud. I think very highly of Lauren Staley Ferry and her staff. I don't think they did anything unbecoming of their jobs. There is no validation on the ballot. For everything I know, the law was followed. There was no disagreement by the judge, myself and my lawyer and the Clerk's office that uninitialled ballots were to be counted. All of the validated ballots were counted."

Boudouris said there was nothing personal with Carlson, who he will now replace on the board.

"She seems like she is a very nice lady and none of this was personal," he said. "I wish her the best and if she runs again, and I hope they do, I will vote for her."

Boudouris said being back on the board to him means serving the district.

"When the campaigning started and the election happened, I had a newborn daughter," he said. "I missed a lot, and I would not have sacrificed that if I didn't care. I want to be part of this to make it better, the Romeoville and Bolingbrook schools have been a big part of my life."

The County Clerk's Office said on a release it was "was disappointed by the judge's decision to disregard those eight votes cast in only five precincts in the Valley View School District. The County Clerk's Office, in a court response filed in June, argued strongly that if ballots without initials were to be disregarded, the standard should have been applied to every precinct in the district, not just the five selected by the challenger. The Will County Clerk's Office was prepared to devote resources needed for a district-wide examination of all ballots. The Clerk's Office takes no interest in which candidates win their elections, but it does have an abiding commitment to the administration of the election process.

The release read, "Disappointment with the court ruling does not negate the fact that training for more than 1,500 Election Judges needs improvement. The Will County Clerk took office in December and began preparing for the April 2 Consolidated Election utilizing training practices that already had been established. The process of improving those practices already has begun."