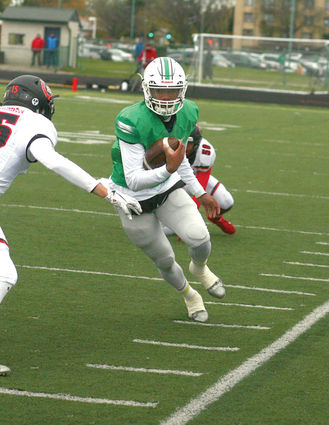 Notre Dame's Matt Murphy had one thought on his mind late in Saturday's game against Barrington.

After missing a field goal and a point-after-attempt, Murphy steadied himself and took a short pause before drilling a 32-yard field goal that would be the difference in a 23-21 win over the Broncos in a Class 8A first-round playoff game in Niles.

The Dons move ahead to play at highly ranked Lincoln-Way East on Nov. 9

"When that one went through, it felt great and I was so happy," Murphy said. "I had to capitalize because I missed the last two. I knew I had to make it for my team."

The Dons were a much different offensive team against the Broncos.

With Julian Schurr back from a two-game absence because of an injury, Notre Dame's offense was able to move the ball to tally nearly 280 yards of total offense.

The Dons had their seven-game winning streak snapped due to consecutive shutout losses to end the regular season. Schurr ran for 48 yards and caught three passes for 57 yards, including a 48-yarder late in the fourth quarter.

"(Julian) gives our offense a different dimension," Notre Dame coach Mike Hennessey. "We should have had some points in those games. But having him back there gives us a whole different aspect. You have to watch three different guys who have exceptional speed with Anthony Sayles, Nick Giamarusti and Julian."

Schurr admitted it was tough watching his team lose to Nazareth and St. Rita.

"Sitting out the past two weeks has been horrible, so coming back and getting to play again was amazing," Schurr said. "I worked very hard to get back to make sure I was there to help my teammates get this huge win."

On third down and 12, Sayles and Schurr hooked up for the play of the game to extend a Notre Dame drive that led to the winning field goal.

Sayles scrambled out of the pocket to his left, saw Schurr roaming free near the sidelines.

The senior running back hauled in the pass before getting tackled at Barrington's 19-yard line for a 48-yard gain.

Schurr credited his key catch to his work with Sayles in practices.

"That play was improvised," Schurr said. "I was going to do an out route and I turned my head and saw Anthony scrambling, so when my guy stepped up, I went past him and Anthony saw me and dumped it over the defender. Me and Anthony have a great connection, so on a play like that, I know he sees me and I'm expecting the ball."

Aside from allowing two big plays, the Notre Dame defense controlled the line of scrimmage and limited Barrington's high-octane offense. Barrington senior running back Quinn Ketel scored on a 78-yard run in the first quarter and wide receiver Aaron Sarkar hauled in a 31-yard touchdown with 52.5 seconds remaining in the game.

"We saw the matchup and we figured this was going to be a heavyweight fight," Notre Dame coach Mike Hennessey said. "They are an excellent team, are well-coached and played a tough schedule. Our defense plays with great speed and intensity and is relentless. They did a tremendous job tonight."

Up next for the Dons is attempting to stop another big-play offense. Lincoln-Way East, led by Michigan recruit A.J. Henning, is undefeated and averaging 34.9 points per game while allowing just six points.

"The challenge will be great because they are undefeated and play tremendous competition," Hennessey said.