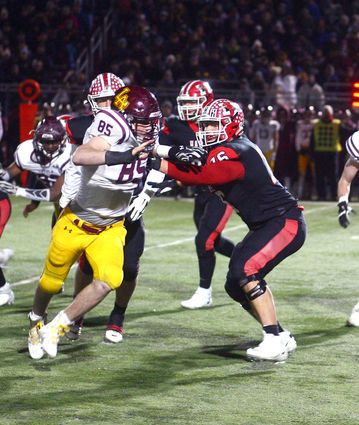 Maine South coach Dave Inserra has been around a long time - 19 years to be exact.

He has led the Hawks to four state championships and three second-place finishes.

Along the way, Inserra has coached a lot of talented football players.

Friday night, he said good-bye to Peter Skoronski ­- the one he calls the best he ever coached.

"He is a true All-American and the greatest player I have ever coached," Inserra said of the two-way lineman.

Skoronski's career and the career of the other Maine South seniors came to an end on the first round of the Class 8A IHSA playoffs with a 14-6 loss to Loyola Academy.

"It is devastating not to be able to play on the field anymore," said Skoronski, a Northwestern recruit, after the game. "We play with our brothers and our family and that is what I am going to miss. I am one of the last guys out here because I don't want to leave.

"I feel like I've let coach Inserra down a little bit. He's never lost in the first round of the playoffs before and this shouldn't have happened. This is my senior year and I consider myself one of the leaders of this team and I am disappointed."

All of the scoring took place in the fourth quarter with Maine South getting on the board first on a fumble recovery and 23-yard return for a touchdown from linebacker Liam Barry.

On the play, a flag was thrown by the side judge on the Maine South sideline, but he was ultimately overruled and the score stood.

"They made the wrong call because (Loyola) had five in the backfield, but you can't worry about the refs," Inserra said. "We had chances early on. We moved the ball."

Loyola added to the score with 1:03 left to play when Thomas found James Kyle from 32-yards out for the touchdown.

"I am really proud of our offenses effort. We protected our quarterback. We just had to take advantage of few more opportunities when we got close," Inserra said. "Defense played stellar, we just didn't get the job done at the end. These are two great programs. Two great coaching staffs, big time players and it was a battle of the titans in the first round."

The Hawk offense was paced by Luke Leongas, who finished the night going 19-for-36 for 267 yards.

He made a late push to get Maine South down the field, but the Hawks fell just shy.

Leongas, a junior, played with a torn Anterior Cruciate Ligament he suffered in the first week of the season, but expects to be back to lead Maine South again.

"Luke playing with a torn ACL the whole year. He is the grittiest kid I've ever seen and he will have it corrected after the season, but what an effort he gave us," Inserra said.

While Leongas will be back, he felt for the seniors that played their final game as a Hawk.

"This is one of the worst feelings," he said. "I love these seniors to death and knowing this was their last game is the worst and I wish I could do something about it. I will love this team the rest of my life. We had so much talent and so much potential, we just didn't get it done."

For the senior group, Skoronski said they had to grow into a Maine South team. 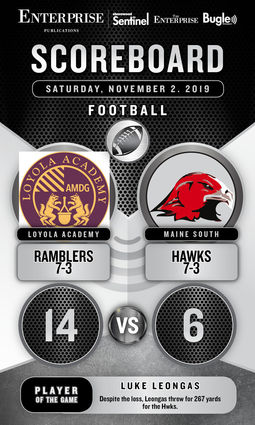 "This senior group was doubted since the day we came in. People said we were a smaller class and not as good and we battled so hard to be a Maine South team because we weren't coming in. This year, we had an 0-2 hole and we battled back to be 7-2. Hopefully, I can represent this program well, because it has given me so much.

"Wins and losses mean a lot, but the people are what you remember."

While Inserra said Skoronski is the greatest player he has coached, the 6-foot-4, 285-pounder gives credit for the player he is back to Inserra.

"I haven't played football very long, but he is the greatest coach I have ever had," Skoronski said. "I respect him more than anyone in this school and in this community. He has given me so much and everything I have done in this program is because he believed in me."