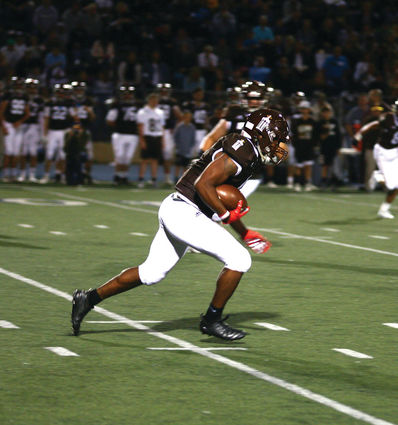 For the second consecutive year, Joliet Catholic Academy travelled to the Peoria suburbs for its IHSA Class 5A first-round football game.

In 2018, the road to Champaign began for the eventual Class 5A State Champion Hilltoppers in the Peoria suburb of Metamora. The Hilltoppers, overwhelmed the four-time champion Redbirds, 49-20.

Up front, only 6-foot, 2-inch, 280-pound senior offensive tackle Connor Kovas returns from the state champion line, which were dubbed "The Nasty Hogs".

"Last year we were "The Big Dogs" and then moved on to "The Nasty Hogs," Kovas said. "Right now we are just staying with the Hogs." It was a great victory today. Our O-Line and Kenyetta and Jordan played outstanding. Our defense totally shut Morton down."

After suffering a season-ending injury in the Hilltoppers season-opener at St. Rita, last season, Williams was excited to play in his first IHSA Class 5A playoff game.

"I am just so thrilled to have been able to play today, after missing our state championship run to injury last season," Williams said. The hogs were outstanding today and our defense totally shut Morton down.

"Jordan (Anderson) is just a sophomore but what a tremendous talent. I started slow today but I am very proud of how I ran in the second half."

Anderson ran for 105 yards on 18 carries and scored one touchdown.

Sophomore quarterback Aidan Voss, rushed for 36 yards on seven carries and broke loose for a 25-yard touchdown scamper in the third quarter.

"It was a solid team victory today," Anderson said. "We played well on both sides of the ball. Our offensive line was outstanding. Being just a sophomore, it was exciting for me to play well. Our whole team is very young and I thank my teammates for my success."

The Hillltoppers took the opening-kick off and marched 62 yards on 12 plays and Williams scored the first of his three touchdowns from one-yard out to get JCA on the board.

After the first of five PATs by junior Jake Dixon, the Hilltoppers led 7-0, with 6:40 left in the first quarter.

"With the windy conditions here in Morton today, I think our opening drive for a touchdown was very instrumental to our victory today," JCA coach Jake Jaworski said.

The Hilltoppers drove 56 yards in 12 plays and extend their lead to 14-0 on Williams' second touchdown, this time from five yards out, with 8:53 in the half.

With six seconds remaining in the half, Anderson rumbled in from the one for a 21-0 Hilltopper lead at the break.

"This was a great win for us today," Purchase said. "We all played well on defense and really shut the Morton offense down. We are very young but we all play very hard."

Voss would break off his 25-yard scamper for six with 6:29 remaining in the third quarter for a 28-0 Hilltoppper lead.

On the last play of the third quarter, Williams raced 33-yards for his third touchdown of the game for a 35-0 JCA lead after three quarters.

With 4:14 left, junior Ja'Aire Mack scored from four-yards out to initiate the 40-point running clock and a 42-0 Hilltopper lead.

The Hilltopper first team defense held the Potters to 100 yards of total offense. Glatz was held to 52 yards on 18 carries. 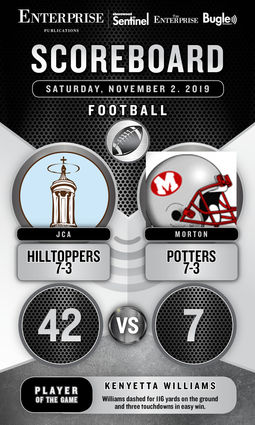 With the Hilltopper reserves on the field, Glatz did break loose on a 35-yard scoring run to finish the game with 116 yards on 20 carries and the touchdown.

"We are so young and it has really been nice to see the growth of our team, each week," Jaworski added. "We graduated 18 starters from our state championship team. Only Connor returned from the Nasty Hogs. It has been another joy for me to see the strides our offensive line has made this season.

"My two inside linebackers, that played so well today, our just sophomores. Aidan (Voss) and Jordan (Anderson) are also just sophomores. I am so happy for Kenyetta. To watch him play so well for us, in his first Class 5A playoff game."

The Hilltoppers will host undefeated Mount Zion (10-0) in a second-round game at Memorial Stadium, Saturday, Nov. 9. Kickoff is set for 2 p.m.